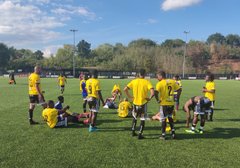 After last weeks defeat away at Hawkinge it was imperative that there was improvement throughout Mary Phillip’s team this week. With a strong match day squad of 15 the early signs were looking good. George Legg started in goal, captain Nicky Meta deputising at left back, Adam Carrick partnered Charlie Egleton in the centre and Kai Smith-Reason at right back. With a central midfield of Joe Thomas and Jacob Kemp, Joshua Montella started on the left wing and Camilo Andres Nieva on the right wing. David Gabor was partnered up front by new signing Eldin Pateriku whilst on the bench were Ethan Frederick, Tidi Barry, Festus Ogunlana and Hamid Bangura.

Both teams started the game brightly although it wasn’t until the 10th minute that Peckham had their first real chance. David Gabor powered his shot goal wards hitting the post. The ball then fell kindly to Camilo Andres Nieva but he side footed it straight at the keeper. Peckham began to take control and again should’ve taken the lead in the 15th minute but Jacob Kemp couldn’t control the ball and headed over.

As the half developed the chances where coming thick and fast for the Menace. David Gabor brought out a fine save from the Ten-Em-Bee keeper as he tipped his shot over for a corner on 39 minutes. From the resulting corner Camilo Andres Nieva couldn’t keep his effort down and blazed over from 10 yards.

The chances were plentiful so surely it would only be a matter of time before Mary Phillip's side would take the lead? This should’ve happened in the 42nd minute but Jacob Kemp saw hit shot go inches wide. When Ten-Em-Bee did attack they couldn’t find a way past Charlie Egleton or Adam Carrick. The two full backs, Kai Smith-Reason and Nicky Meta, also shut the door on their efforts.

Perseverance is key and as the saying goes, if at first you don’t succeed, try try again, and Peckham finally found the back of the net in the 43rd minute. Joshua Montella sent in a deep cross from the left towards the far post. The ball then ricocheted off of a Ten-Em-Bee defender sending it back into the six yard box, David Gabor saw his chance and headed home.

The chances continued coming and Jacob Kemp twice could have doubled Peckham’s lead before the first half finished. His first effort, a snap shot from 20 yards sailed inches wide in the first minute of added time. His second was on target but the keeper dived low to his right to deny him his goal.

That was the last action of the first half and time for a positive team talk from Mary Phillip. Peckham were clearly in control so it would again be more of the same in the second half. With no half time changes the second half was underway and again it was all Peckham. Chances again coming just as easily as in the first half, Joshua Montella unable to keep his effort down, three minutes after the restart.

Peckham won a corner on 54 minutes and Joshua Montella’s kick found the unmarked Adam Carrick. The defender must have seen it late as he didn’t connect properly, heading the ball into the ground and over the bar!

Three minutes later and Peckham made their first change, Hamid Bangura replacing the debutant Eldin Pateriku. Not a bad debut with signs he could be a decent acquisition to the squad.

Joe Thomas again found himself going into the referees book for a late challenge on 63 minutes as Peckham continued to dominate. They eventually got their reward from a Joshua Montella corner in the 66th minute. The ball found an unmarked David Gabor who tapped home for his and Peckham’s second much deserved goal.

The chances kept coming as Peckham continue to put Ten-Em-Bee on the back foot. Joshua Montella was unlucky not to score as he unleashed a rocket of a shot only to hit the post on 67 minutes and the ball was then put out for a corner. Four minutes later Hamid Bangura should have done better but hit his shot wide of the host's goal.

Peckham then almost gifted Ten-Em-Bee a goal as they moved forward in one of their rare attacks. The ball was crossed in from the left and found their striker unmarked in front of an almost empty net. Thankfully he miss-timed his header and George Legg gathered the ball with ease.

Was this a warning sign for the Menace perhaps? If it was, it certainly wasn’t taken seriously enough by Mary Phillip’s team. Joe Thomas was then replaced in a tactical substitution which saw Tidi Barry enter the game in the 76th minute, his earlier yellow card obviously not forgotten.

As the game approached the final ten minutes, again Peckham found themselves in good goal scoring opportunities and really should have put the game to bed. Jacob Kemp again shot inches wide on 77 minutes and David Gabor should have had his hat-trick two minutes later, again shooting inches wide!

With ten minutes to go Peckham unexpectedly gifted their hosts a life line. The ball again crossed deep into the Peckham area, George Legg hesitated, Adam Carrick went to head clear but his effort looped over his keeper and into the net for an own goal.

This goal gave the hosts a massive boost who now believed they could get something from the game especially as Peckham looked a little rattled. The game turned in the 84th minute when Camilo Andres Nieva was floored by an obvious elbow to the side of his head. After some lengthy treatment it was clear that the Peckham winger was unable to continue and was replaced by Ethan Frederick.

After consulting with his assistant the referee decided on a drop ball to Ten-Em-Bee! The enforced substitution changed Peckham’s dynamics and the hosts went on the attack. Mary Phillip’s defenders failed to clear and a Ten-Em-Bee player found himself enough space to shoot goal wards. George Legg launched himself toward the ball but it had too much pace on it and found the back of the net!

With 89 minutes played and against the run of play the hosts found themselves level, much to theirs and Peckham’s surprise. However Ten-Em-Bee weren’t finished yet and as the game entered added time they continued to pressurise Peckham.

Another mix up at the back in the third minute of added time, Peckham again failing to clear and another unchallenged shot was sent flying towards George Legg’s goal. As the Menace stopper went down to make an easy save the ball skimmed off the rain soaked surface and under his body and in!

Every Ten-Em-Bee player bar their keeper and one defender ran to the corner celebrating their taking the lead. And it was the winning goal, as the referee called time two minutes later!

Two defeats in a row for Mary Phillip’s side, despite them being the better team on the day. Again there were plenty of positives to take from the game, but also a few negatives. Time again to regroup and work hard on the training ground to eradicate those silly errors and with the team returning to action next week back at the Menace Arena, Mary Phillip’s side might just need the help from the Menace faithful to really get behind her team!