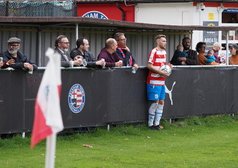 KINGS OF THE HILL

This week’s game was all about the reaction Mary Phillip would get from her players after last week's disappointing defeat. Whatever she said to her team worked because their reaction was spot on. George Legg started in goal, Kai Smith-Reason at right back, Ben Whittaker partnered Charlie Egleton in the centre of defence and Adam Carrick once again at left back. Captain Nicky Meta started on the left wing, Camilo Andres Nieva on the right and Joe Thomas partnered Jacob Kemp in the centre of midfield. Joshua Montella and David Gabor were the two up top with new signing Togba Tarpeh starting on the bench along with Tidi Barry, Festus Ogunlana, Mark Matthews and returning from injury, Kieran Dowding.

With a crowd of 140 the Menace Arena was buzzing in anticipation prior to kick off. After a slight delay to remove some ‘fox leavings’ from the pitch the official blew his whistle and Peckham kicked off. Both teams started brightly and showed their intent very early on. Peckham really should have taken the lead in the fourth minute as they attacked down the left wing. Captain Nicky Meta sent in a cross from the left which found the unmarked David Gabor. The Menace striker hit it first time from six yards out but to the amazement of all, his effort went wide of the empty goal when it was easier to have hit the back of the net!

Three minutes later and it was the visitors that came close to opening the scoring. George Legg however, had other ideas and made a fantastic fingertip save to deny them a goal. Mary Phillip’s side were growing into the game and chances were again coming thick and fast. David Gabor did well to bring the ball down with his chest in the 12th minute but his resulting shot went inches wide of the far post. Within a minute Kemp saw his long range effort sail high over the Kings Hill crossbar. Surely it can’t be too much longer until the midfield maestro opens his Peckham account?

Peckham continued to attack at every opportunity so it was no surprise when they did eventually open the scoring in the 15th minute. Camilo Andres Nieva powered down the right wing and sent over an inch perfect cross into the Kings Hill area. David Gabor flicked it on the volley, slotting the ball past the outstretched keeper and into the far corner of the goal from six yards out! A well deserved goal created by some great football in the build up from Peckham.

Again when Kings Hill attacked, and every Peckham player played their part, Ben Whittaker and Charlie Egleton again showed their dominance in defence. Both full backs, Kai Smith-Reason and Adam Carrick supported their wingers ahead of them. The turning point in this game came in the 39th minute as Peckham again piled forward. David Gabor chasing a through ball fancied his chances in a 50-50 with the Kings Hill keeper. As the two clashed on the edge of the 18 yard box the referee blew his whistle for a foul. Which way was this going to go, Peckham’s way and surely a red for the keeper? The official however favoured the visitors and awarded them the kick, but the drama wasn’t over yet. The keeper was down injured and looked in a lot of pain, and after nearly five minutes of treatment it was clear he could no longer continue. Without a recognised substitute keeper, the visitors replaced him with an outfield player, their centre half donning the gloves. The game continued, and as their injured keeper left the field he was greeted with a round of applause from the Menace faithful.

The enforced change for Kings Hill affected their rhythm and Peckham now had them on the ropes. It took only a minute for Mary’s Phillip’s side to test the stand-in keeper as Joshua Montella shot from close range on 40 minutes. To be fair, their keeper saved well, but as the Peckham striker unleashed his shot he was caught on the ankle by the Kings Hill defender’s challenge and was left in a crumpled heap in their 18 yard box. The game continued as the Peckham striker received treatment and he was able to rejoin the game two minutes later.

The game entered into added time in the first half and there would certainly be at least 5 or 6 minutes still to play. Kings Hill were looking like half time couldn’t come quick enough whereas Peckham didn’t want the half to end. With two minutes of added time on the clock Peckham notched their second goal of the game and what a goal it was. In a moment of pure brilliance, captain Nicky Meta cut in from the left and from 20 yards out he let fly. His shot curled round the advancing Kings Hill defenders, over the keeper and in.

Peckham weren’t finished with their opponents just yet as there was still plenty of time for more drama in the first half. With three added minutes on the clock Mary Phillip had to make a change as Kai Smith-Reason was forced off with an injury and on came new signing Togba Tarpeh as a like for like replacement.

Peckham continued to pile the pressure on their opponents and Charlie Egleton headed just wide from a corner in the 6th minute of added time. As the game entered its 7th added minute Peckham got their third goal of the game. Outnumbered in defence by three to one, David Gabor had time to turn his marker twice to slot home from 10 yards. Thankfully for Kings Hill the official blew for half time seconds after the restart. Time for two very different half time team talks from both managers for sure.

As the second half approached, Mary Phillip opted to replace Joshua Montella with Kieran Dowding before the restart. The striker was obviously showing some discomfort from his earlier injury in the latter stages of the first half. Thankfully the Menace winger has played as a striker many times before so wouldn’t be out of place in this position. The visitors however came out a different team on the second half and had Peckham on the back foot early on, shooting just wide on 46 minutes.

Mary Phillip’s team looked happy to sit back for a while and soaked up the pressure and they did it well. Kings Hill then saw their number 12 go into the book on 56 minutes for a cynical foul on Camilo Andres Nieva, thankfully the Menace winger wasn’t seriously injured and was fine to continue. Mary Phillip’s then opted for a third change on 59 minutes and Mark Matthews replaced Nicky Meta, who left the game to thunderous applause from the Menace faithful.

Time for a reshuffle which saw the substitute play up top with Kieran Dowding reverting to his more favourable winger role. The first yellow for Peckham came two minutes later as the debutant Togba Tarpeh brought down his opponent. Both sides were now having discipline issues with yellow cards coming thick and fast, Mark Matthews going into the book on 66 minutes.

Kings Hill continued to search for a way back into the game but Mary Phillip’s team continued to defy them with some great defending. Awarded a free kick on 73 minutes, the Kings Hill set piece never really troubled George Legg who saved easily. Two minutes later Peckham should have had their fourth of the game, in fact how they didn’t is credit to some frantic Kings Hill goal line defending. Kieran Dowding, finding himself with space on the left and unleashed a shot from 25 yards out. The keeper spilled the ball into the path of the advancing Camilo Andres Nieva. His effort then hit the retreating Kings Hill defender who in turn cleared the ball only for it to hit Jacob Kemp and then rebound into the arms of the keeper who then cleared the ball to safety!!

Time for another Peckham change as the double goal scorer David Gabor was replaced by Tidi Barry on 77 minutes. The striker left the field to a rapturous applause from the home crowd and rightly so. With no recognised striker on the pitch for Peckham, this didn’t deter them from continuing to put their opponents under pressure. As the Menace attacked, Kings Hill’s afternoon went from bad to worse as Camilo Andres Nieva was brought down in the penalty area in the 78th minute. A clear tug on the winger's shirt gave the official no option but to point to the spot. Confidently the Peckham winger claimed the spot kick for himself and slotted home despite the keeper guessing the right way. Game over now for certain, but there was still plenty of action left from both sides.

Joe Thomas, so solid in midfield as usual, picked up his customary yellow card for a tackle from behind as the game entered the final ten minutes. He may have to take out a mortgage to cover his fines this season. A minute later and again George Legg showed just how good a keeper he really is. The Kings Hill midfielder fired in a shot from 20 yards out, it looked destined for the top corner until the Menace stopper dived to his left and palmed the ball out for a corner!

Mary Phillip’s decided on her final change in the 84th minute as Festus Ogunlana was introduced to the action replacing midfielder Joe Thomas. As the game entered added time Adam Carrick went down with a head injury. Rising to head clear the ever present defender was clattered to the floor by the advancing Kings Hill striker. Thankfully after some rapid treatment he was fine to continue, all part of the cause as per usual for the Peckham player! The game was now deep into added time when Festus Ogunlana came close to getting number five, his effort from 20 yards just inches wide of the near post.

That was however the last action of the game and the official called time in the 5th added minute. A fantastic result for Mary Phillip’s team and just the reaction she required from her team. Any of the starting XI could have picked up the King of the Match award, but due to the way he commanded his area, and because of the outstanding saves he pulled off, it was rightly given to the Menace stopper, George Legg. When things fall into place, this is what Peckham can be capable of every week, and if they continue to play this way there’s no reason they can’t go on a winning run again, starting next week away to Red Velvet.