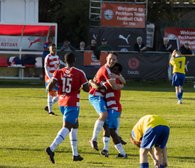 As football fell silent to remember the fallen heroes, a crowd of 125 inside the Menace Arena paid their respects before a thrilling game of football unravelled before them. With last week's Cup encounter in Tunbridge Wells postponed, then Mary Phillip had a full match day squad at her disposal. George Legg started in goal, Togba Tarpeh started at right back and Charlie Egleton partnered Ben Whittaker in central defence. With Adam Carrick injured and Elton Romaku still not 100% fit, captain Nicky Meta deputised at left back. The midfield consisted of Jacob Kemp and Joe Thomas in the middle and Camilo Andres Nieva at right wing, and Kieran Dowding in his more familiar left wing role. With Joshua Montella still injured Hamid Bangura started up front alongside David Gabor. Elton Romaku, Tidi Barry, Eldin Pateriku, Festus Ogunlana and new signing Ricardo George were the options on the bench.

After an impeccably observed two minutes silence from all inside the Menace Arena, Peckham got the game underway. Within 2 minutes Stansfeld showed their intent as they attacked the Peckham goal but thankfully George Legg wasn’t troubled as their effort was put wide. It wasn’t too long before Mary Phillip’s side had their first real effort on goal, Jacob Kemp seeing his strike put out for a corner as the visiting keeper saved on 9 minutes.

Captain Nicky Meta stepped up and sent in a deep ball towards the back post, unfortunately for the advancing Jacob Kemp it was just too deep for him and he headed high and wide with ten minutes played. Two minutes later and Peckham were on the attack but Camilo Andres Nieva couldn’t keep his shot down, the feisty winger showing again what a handful he can be for opponents.

The visitors however came tactically prepared, playing short balls out from the back then looking to hit Peckham on the counter with long balls over the top. This was evident in the 14th minute as the ball over the top beat the Menace back four, but the resulting shot was again put wide.

As the game progressed Peckham became wise to their opponents game play and both Togba Tarpeh and Nicky Meta were already putting in some fine defending against the Stansfeld wingers. Any central aerial threat and both Ben Whittaker and Charlie Egleton were there to bring it to an abrupt halt. The visitors however were awarded a free kick some 35 yards out from George Legg’s goal with 18 minutes played. It was clear the Stansfeld man was going for goal, but the Menace stopper had set his wall up perfectly and the ball was eventually cleared.

So far neither team had really looked like scoring but that would change just after the halfway mark in the first half. Once again on the attack the ball was played high into the Stansfeld area, and seeing his chance Jacob Kemp rose above three defenders and headed home to finally open his Menace account.

The visitors looked visibly rattled and Peckham took full advantage of this. Charlie Egleton had the ball in the back of the net five minutes later but the celebrations were short lived as the assistant on the near side rightly raised his flag for offside.

The visitors took their free kick quickly but Mary Phillip’s team immediately won the ball back, Jacob Kemp then saw an opportunity and let fly from the edge of the box. The Stanfeld keeper had no chance as the ball flew into the top right hand corner of his goal. The midfield maestro peeled away to celebrate with his teammates and the Menace faithful erupted in awe of his strike, and it was certainly a contender for goal of the season! With half an hour played and two goals to the good, it was no more than Mary Phillip’s side had deserved.

Peckham were forced to make an early change before the restart, David Gabor had gone to ground in the build up to the second goal and after some treatment he was eventually replaced by Eldin Pateriku. Such an early change could have upset Peckham’s rhythm, but thankfully the versatile replacement slotted straight in without any issues.

With the two goal cushion it was important now that Peckham didn’t become complacent as can sometimes be the case. As the visitors attacked George Legg pulled off a fine save to deny them a way back into the game on 36 minutes. Peckham then countered but the visitors defended well and were able to clear. Every time Peckham attacked they caused their opponents problems, with Kieran Dowding and Camilo Andres Nieva both a real threat every time they had the ball.

On 37 minutes Peckham won a free kick just outside the visitors area on the near side. As Eldin Pateriku drove forward the Stansfeld defender tugged at the burly forwards shirt giving the assistant no option but to wave his flag to indicate the offence. The resulting free kick didn’t cause Stansfeld any problems and they cleared the ball with ease.

With five minutes of the first half remaining Peckham gifted their opponents a goal, a lapse in concentration at the back and the ball was in the net. Unsurprisingly this gave Stansfeld a boost and Mary Phillip’s team would have a nervy few minutes ahead of them and despite a cynical foul on Charlie Egleton resulting in the first booking of the game in added time wasn’t enough to unsettle Peckham and they went in ahead at the break.

Time for a positive team talk from Mary Phillip once again, but she would have also given her team a warning as the visitors had finished the first half strongly. With no further changes for Peckham at the break Stansfeld got the second half underway. Mary Phillip’s team started strongly and should’ve doubled their lead within four minutes of the restart. As they attacked down the right Camilo Andres Nieva whipped in a ball across the visitors goal mouth, but whether it was a shot or a cross all that was needed was a touch and it was in.

Two minutes later and Kieran Dowding had his sights on goal but he was unable to find any accuracy and volleyed wide. All too often this season Peckham have provided their opponents with goal scoring opportunities and again this was the case on 56 minutes. What should have been an easy defensive clearance ended in disaster. Charlie Egleton got the ball caught under his feet and slipped, gifting a chance to the Stansfeld man and seizing his opportunity and before the Peckham defence had time to recover the ball was in the back of the net for the equaliser!

The visitors celebrated as the Peckham bench looked on in disbelief, as did the supporters as Mary Phillip’s team had so far out played their youthful opponents. Thankfully the Peckham heads didn’t drop and they continued to pressurise the Stansfeld defence. With 58 minutes played Peckham had their first card shown, winger Camilo Andres Nieva going into the official’s book for tripping his opponent. It was at this point Mary Phillip made her second change, and captain Nicky Meta was replaced by debutant left back Ricardo George, who quickly showed what an asset to the squad he will be.

As Peckham once again took control of the game frustration set in for their opponents, one of their coaching staff going into the officials book on 62 minutes. Within a minute Peckham's team should really have taken the lead as the ball fell to Camilo Andres Nieva on the edge of the area. Unfortunately he just put too much power into his shot and it sailed just wide of the top right hand corner of the Stansfeld goal.

Three minutes later on 63 minutes Joe Thomas picked up his obligatory yellow card as the midfielder pushed his opponent to the floor after already winning a throw-in. Frustrating for all as this overshadowed his performance, up until this point he had a strong game in the centre of the park!

Peckham continued to dominate and were looking the more likely team to score and their reward finally came on 69 minutes from a corner taken by Eldin Pateriku. The versatile forward sent in an inch perfect ball into the 18 yard box, Hamid Bagura leapt above the Stansfeld defenders and headed home at the far post beating the outstretched keeper.

On balance Peckham deserved the lead and should never have allowed their opponents back into the game. It would now be a case of either seeing out the game or going in for the kill, but either way Mary Phillip’s players would need to stay assertive.

Within four minutes of the restart Peckham were again forced into making another change. Eldin Pateriku looked in some discomfort after picking up a knock and was replaced by Frestus Ogunlana. A disappointing end to the game for the Menace forward who had given 110% since coming on in the first half.

Peckham continued to threaten the Stansfeld goal and again Camilo Andres Nieva came close on 76 minutes. The winger cut in from the by-line and lost his marker, switching the ball onto his left foot he shot inches wide of the far post. The visitors however hadn’t given up hope of snatching another equaliser and they came close on 77 minutes shooting just wide of George Legg’s goal.

Peckham had to dig deep and soak up the pressure from a series of corners, a goal line clearance denying the visitors an equaliser ten minutes from time. With three minutes of normal time remaining Tidi Barry replaced Hamid Bangura which saw the midfielder take up the strikers position, and he was unlucky with a couple of efforts on goal.

As the visitors threw men forward Peckham had chances to wrap up the game but they weren’t taken. Festus Ogunlana twice came close on 88 and 90 minutes, heading wide and shooting over respectively. Kieran Dowding even brought out a finger tip save from the Stansfeld keeper in the 2nd added minute resulting in a Peckham corner. Mary Phillip’s team held out despite a late corner for the visitors in the 4th added minute, her players did enough to take all three points.

As the score line suggested this was a thrilling game, and a close game, but it was a game where Peckham caused more problems for themselves than their opponents had caused. Stansfeld never really threatened George Legg’s goal and their chances came from mistakes at the back. Errors aside it was a decent all round performance from Mary Phillip’s team, and another performance where any number of her players could have won the King of the Match award. There was however one player that slightly edged it, again dominant in midfield and after finally getting on the score sheet with two goals, it was awarded to midfielder Jacob Kemp. Time now to focus on next week’s London Senior Cup match as FC Elmstead come to the Menace Arena.