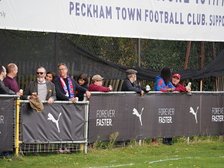 Cup fever returned this week as Peckham welcomed higher league opponents FC Elmstead, unbeaten in their last eight matches, to The Menace Arena. Mary Phillip had a strong match day squad as George Legg started in goal, Togba Tarpeh at right back, Ricardo George at left back, and Ben Whittaker partnered today’s captain Charlie Egleton in central defence. With Camilo Andres Nieva nursing an injury Mark Matthews started on the right wing, Kieran Dowding on the left wing with Tidi Barry and Joe Thomas in the centre of midfield. Joshua Montella returned from his recent injury to partner David Gabor up top. On the bench was goalkeeper Nathan Gamester, Elton Romaku and returning from injury Adam Carrick, Festus Ogunlana and striker Hamid Bangura were the two remaining substitutes.

With a bumper crowd of 129 inside The Menace Arena, the match official got the game underway and the visitors kicked off. From the get go FC Elmstead looked to show their higher league status and immediately attacked the Peckham goal. Mary Phillip’s side however were keen to show they would not be a pushover and immediately countered winning a free kick on the near side just outside the 18 yard box with barely two minutes played. Up stepped Joshua Montella to take the kick but he put it too close to the visiting keeper and he gathered the ball easily.

Early on it was clear where the threat would come from as the FC Elmstead left winger made some pacey runs, Mark Matthews and Togba Tarpeh stepped up immediately and were equal to his wizardry. The visitors certainly looked a strong side in the early stages but it was Peckham that stuck first.

Winning the ball deep in their own half Mary Phillip’s team countered and a ball over the top of the midfield found David Gabor. He controlled it well and ran goal wards, he turned his marker on the edge of the area and hit it on his right foot looping the ball over the keeper and into the net. The Menace Arena erupted into joyous celebrations as the Peckham players celebrated the goal. With seven minutes played the visitors looked stunned at conceding so early, so it was important that Peckham didn’t get carried away and stayed switched on.

The game was already end to end and again Charlie Egleton and Ben Whittaker were making important interventions to protect Peckham’s lead. Both sides were playing counter attacking football looking to hurt each other on the break. Both the Peckham full backs, Togba Tarpeh and Ricardo George supported their respective wingers ahead of them every time they had the ball.

Peckham almost doubled their lead, and probably should have, but Joshua Montella shot straight at the keeper on 14 minutes. Within a minute the visitors opted for an early change, the replaced player did not seem injured, so it was perhaps an early tactical change.

Mary Phillip’s side continued to attack at every opportunity and were awarded a free kick for handball some 30 yards from goal. Up stepped Joshua Montella again and looped his kick into the 6 yard box, but it just had too much pace on it and bypassed his teammates and went out for a goal kick.

The visitors immediately attacked from the goal kick but thankfully George Legg was on hand to make two point blank saves to deny them an equaliser. So far the Menace midfield had been equal to their opponents with both Joe Thomas and Tidi Barry impressing. With 20 minutes on the clock Tidi Barry turned on the style, picking up the ball in his own half he went on a run, weaving his way through the FC Elmstead players and into their 18 yard box. With numbers back in defence he opted to pass back to Mark Matthews but he never got his body over the ball and side footed it high over the bar!

FC Elmstead continued to search for the equaliser and were awarded a free kick in a dangerous position in the 24th minute. The ball was played deep into the Menace area and toe poked towards the Peckham goal. George Legg did well to get down to his left to make the save but the whistle had already been blown for an infringement and a free kick was awarded to Peckham.

The visitors continued to pile on the pressure and came close to an equaliser two minutes later but thankfully they only found the side netting! Peckham now had to dig deep as the visitors twice came close from a couple of corners. The first was headed just wide on 27 minutes and the second headed high over the goal two minutes later, the Peckham defence doing just enough to put their opponents off perhaps?

As the half drew on the visitors were getting frustrated as several decisions went against them. They were however awarded a free kick in the 38th minute as Tidi Barry looked to have won the ball but caught his man in the follow through. The FC Elmstead centre back took exception to this fair, but hard, challenge for the ball by shoving Tidi and getting in his face. Both players went into the book, which was harsh on the Menace midfielder.

With just four minutes of the first half left Peckham again should have doubled their lead. David Gabor won the ball just inside his own half and played a great ball forward. It eventually fell to Joe Thomas just inside the ‘D’ and turning his marker the Peckham midfielder had the goal at his mercy. Cries of ‘shoot’ rang out from the crowd, but he opted to pass into an empty area and the ball went out for a goal kick! The game paused for a minute as David Gabor was down injured after picking up a knock in the build up but after some treatment he was fine to continue. The first half entered added time and there was barely a minute to play before the official brought it to a close.

A goal to the good, and matching their opponents all over the park, Mary Phillip’s half time team talk would be positive but a cautious one. It would be imperative that her side stay switched on, support each other going forward but get back and defend in numbers when needed. With no changes at the break, Peckham kicked off the second half.

Kieran Dowding tried a speculative effort from 25 yards out after Joshua Montella played the ball to the unmarked winger on 49 minutes. Hitting it first time the Menace winger couldn’t keep it down and the FC Elmstead keeper wasn’t troubled.

Two minutes later and George Legg was again the Peckham saviour as the visitors were awarded a free kick 30 yards out. The FC Elmstead man opted to go for goal and hoped to sneak his shot in at the far post, but the Menace stopper got his hand to it, putting the ball out for a corner. From the resulting corner Peckham won the ball and countered, Joshua Montella managed to get his shot away at goal but he hit it over the bar.

Peckham continued to search for a second goal and were awarded a penalty in the 55th minute. As they attacked the FC Elmstead goal a defender won the ball cleanly, but it then bounced up and struck his arm, the official had no choice but to point to the spot. Taking on his captain’s responsibilities up stepped Charlie Egleton to take it and hopefully put the game to bed. Unfortunately for the stand-in skipper he skyed his effort high over the visitors goal, much to the delight of the FC Elmstead players, bench and travelling support.

Peckham’s heads didn’t drop and they continued to match their opponents. Joshua Montella had an effort cleared off the line 3 minutes later, and again he shot over the goal on 61 minutes! If Peckham had taken any of these chances, then the game would have been largely put to bed.

With 71 minutes played Mary Phillip made her first change and Hamid Bangura replaced Joshua Montella. Barely on the pitch for two minutes the Peckham forward should have doubled their lead with his first chance of the game as Mary Phillip’s side again countered. Unfortunately for him the chance possibly came to him too soon and he hit his effort straight at the keeper.

Peckham’s second change came on 73 minutes, Adam Carrick replacing Tidi Barry, slotting in as a defensive midfielder, a wise move and proving his worth with some great defensive tackles. As the game entered the last ten minutes Peckham needed to be on their toes as the visitors continued to push for the equaliser. With some valiant defending from Mary Phillip’s team they denied them their opportunity as they barraged George Legg’s goal.

The visitors however did eventually get their reward three minutes later in the 83rd minute. After being awarded a free kick on the near side, the ball was whipped deep into the Peckham 6 yard box and nodded home at the far post by their number 17, Kyle Beckford, who had managed to escape his marker.

After Peckham had led for so long the visitors were level and their heads could have easily dropped! But Mary Phillip’s team turned it up a gear and continued to threaten their opponents as penalties beckoned! The game entered into added time and still both teams went searching for the winner, both denying each other with great defending. As the game entered the fourth added minute Peckham were awarded a free kick almost dead centre on the edge of the 18 yard box. Up stepped Joe Thomas to be the hero but he put his effort high over the bar, when there was perhaps a gap to the right of the goal with the visitors’ electing for just a 4-man wall.

After a further three added minutes the official brought the game to an end and so it was time for the lottery that is penalties. Whatever happened now was in the hands of both keepers and the spot takers.

Fc Elmstead would take the first spot kick and they scored, Joe Thomas then converted Peckham’s first, and the visitors converted their second. Next up for Peckham was Mark Matthews who sent the keeper the wrong way to score and make it 2-2.

FC Elmstead were then denied a third as George Legg saved, and Ricardo George converted to make it 3-2 to Peckham after three penalties each. Up stepped the number 5 of FC Elmstead who had had a lot to say all match. He realistically needed to score to keep his side in it, but George Legg dived to his left and pulled off an excellent save. The Menace Arena erupted!

It was now up to Kieran Dowding to convert the winner, which he did with aplomb! His teammates sprinted from the centre circle to celebrate the shoot out win with the spot kick hero, but the real hero of the day was the Peckham keeper. With the two penalty saves the King of the Match went to George Legg, but there were really eleven King of the Match winners out on the pitch today.

Mary Phillip’s side upped their game against a very strong higher league opponent, and that is a credit to the Peckham manager in itself. Down the road Forest Hill Park won their 2nd round tie, and will now travel to the Menace Arena for a quarter-final match in January (date TBC). This is a rematch of the semi-final in 19/20 season when Marcus Black scored the only goal in injury time to fire the Menace into the final. Menace fans will have this match to look forward to and the opportunity to qualify for the semi-final of the London Senior Trophy. In the meantime, Peckham returns to league action next week down on the Kent coast as they take on New Romney.