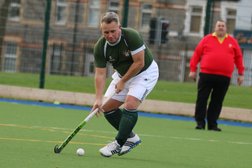 Penarth's 3rd XI, denied their chance to play in the rarefied air of De Cymru & The Marches by the onset of COVID-19, returned to life in De Cymru 1 with something of a bump at Abergavenny, hampered by a lack of availability and late withdrawals.

Arriving with only nine men — and the vague promise of a late addition — Penarth prepared to dig in, an apt mentality given the sandy nature of the Abergavenny pitch. Adopting a 'fight them on the beaches' mentality, the visitors started well, repelling early attacks from the home side, while looking capable of countering on the break. Indeed, it was the Bears that went ahead, a neatly-finished goal from Keegan Hoare that relied on persistence down the left from Owain Mottram rocking the hosts.

The scoreline remained for some 25 minutes, with both side regretting chances that went begging. Penarth continued to press forward, with Mottram and Hoare linking up more than once to split the Aber defence. At the other end, meanwhile, the Bears' veteran defence found itself coming under greater pressure as the home side found ways to break through, but generally succeeded in protecting teenage 'keeper Joe Casey's goal.

The resistance lasted until shortly before the break, when a well-taken goal brought the sides level and Abergavenny immediately capitalised on the blow by inflicting another to take the lead — the two strikes split by another effort that hit the face of both posts and remarkably stayed out.

If Penarth were stunned by the turnaround, their daze was nothing compared to that after ten minutes of the second half, when a flurry of goals effectively put the game beyond reach. A combination of rising temperatures, early-season fatigue and both good and fortunate play from the home side quickly pushed the score to 5-1 in their favour, with Casey blameless as the Rorke's Drift efforts of Mark Robinson, Graeme Jones, Craig Llewellyn and captain James Davies in front of him began to falter.

Although Hoare pulled one back for the Bears, reward for the selfless running of Elliott van Steen and newcomer Grant Riddle, Abergavenny put the game beyond doubt with a sixth in the closing stages, creating a final scoreline both unrepresentative of the game and unfair on the unstinting efforts of the Penarth Nine.