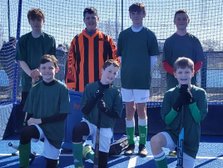 Penarth Hockey Club’s Under-14 section earned a place in next month's South Wales Cup Finals with a gutsy performance across five qualifying games in Swansea at the weekend.
Having started the season with barely enough players to field a team in the age group, and having to use Under-12 newcomers to make up the numbers, things looked bleak for the club, which once boosted the best youth set-up in Wales. However, since September, the junior coaches have worked tirelessly, not only to bring new blood into the section, but also to train up those newcomers to a standard where they could hold their own against some of the best in the region. And, what is more, Penarth had representation in not only the Cup competition, but also the Plate category that played out alongside.
With only patchy success in friendly tournaments either side of the winter break, Penarth already faced a tough task to make it out of the six-team qualifying group, and that ambition took another hit when two key members of the squad contracted COVID at the start of the week. The team's response was to call up a second U12 player from the Plate team and hope to make it through without any further injuries.
Despite not making their now-familiar slow start to competition, Penarth still fell heavily in their opening game, going down 4-0 to a Gwent side that benefited from a world-class opening goal and a little bit of luck to round out the scoring. However, although disappointed, the junior Bears did not let their heads drop — and it was somewhat ironic that a subsequent clash of heads appeared to galvanise the team going forward.
Robbed of talismanic midfielder Iwan Llewellyn for the majority of game two, the now six-man Penarth team battled fought tooth and nail against Whitchurch, only going down 1-0 to the pre-tournament favourites. With old nemesis Cardiff & Met next up, the Bears knew they had to dig deep if they were to remain in contention for a qualifying spot and, back to full strength, produced a display full of skill and character. With Llewellyn restored to a defensive trio also featuring Llew Pierce and Will Edwin, Cardiff were limited to desperate forays into the Penarth half while, up front, unrelated U12s Harri and Rhys Lewis combined to produce a 2-0 win.
Game four, against hosts Swansea, was decided in heart-breaking fashion as the ball trickled across the Penarth line for the only goal of the game but, once more, the Bears acquitted themselves admirably against a physically bigger side that, like the rest of the clubs in attendance, had multiple substitutes to call upon.
With one game remaining, Penarth knew what had to be done in order to have a shot at qualifying and, without knowing how results elsewhere affected their chances, proceeded to destroy a Bridgend side that, prior to also beating Cardiff, most had expected to be the competition's whipping boys. Penarth goalkeeper Max Barton — who only started playing hockey, never mind the complex position between the sticks, after Christmas — had his quietest game of the day, having more than kept his side in previous games, while Owen Weeks came into his own, blending unstinting work rate with solid attacking ability to not only grab two goals for himself, but also set Rhys Lewis up for another brace.
The result was enough to propel Penarth into the Finals along with Gwent, Whitchurch and Swansea, but only told half the day's story, as the Plate side played just as hard in the afternoon competition.
Consisting largely of U11 and U12 players, the team showed never-ending fight and, despite being far less experienced than the majority of their opponents, remained in each of the five games until the final whistle. With Barton again producing a string of amazing saves to give his cohorts confidence, the squad of Josh Donovan (captain), Ioan Redwood, Gethin Hughes, Steffan Redwood, Elis Redwood, Jackson Ely and Riley Pepper earned special mention for their efforts at the end-of-day prize-giving.
The U12s will have their own Cup qualifying competition in two weeks (Saturday 2nd April), with the South Wales Finals, again in Swansea, scheduled for the weekend of 23rd-24th April.
Share via
FacebookTwitter
https://www.pitchero.com/clubs
Recent news