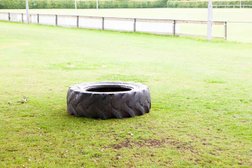 The 1st XI wrapped up the first half of their season looking to continue their winning ways after an impressive 7-3 away win against Exeter University as they hosted Team Bath Buccs at Stanwell in the last game before the Christmas break.

Penarth took to the field with the same outfield line-up that proved so effective against Exeter and it was the home side who looked to take control of the game in the early stages, showing composure on the ball and finding pockets of space between the Bath lines. The Bears also showed commendable patience in their defensive line, working the ball around the back to try to create - and exploit - space on the wings. Bath, meanwhile, struggled to create many opportunities going forward, as the whole Penarth team worked hard in defence.

Despite the balance of possession resting comfortably with the home side, however, it was Bath who had the first clear opportunity of the game after being gifted a penalty corner, but the threat was well saved by Adam Putt in the Penarth goal to keep the game scoreless.

Penarth continued to work well when they had the ball, and pressed the Bath defence aggressively when they didn’t, eventually creating their first chance of the game as the forwards swarmed the Bath centre-back as he attempted to run the ball out of defence with all his passing options marked. Bears stalwart Chris was the one to emerge with the ball, before advancing into the D and calmly slotting the ball past the onrushing ‘keeper to give Penarth the lead.

The home side didn’t let the tempo drop having gone ahead and, after winning the ball from a Bath attack deep in their own half, immediately looked to counter attack, with three quick passes covering the length of the field before ending at an unmarked Laith Khatib, who was able to fire the ball past the Bath ‘keeper to make it two goals in two minutes.

Spurred on by the success, Penarth continued to press forward, looking to further extend their lead, but over-enthusiasm in defence led to Jake Joyce picking up a green card, and the game continued evenly with neither side creating any clear goal-scoring opportunities before the break, a period in which the Bears again found themselves reduced to ten men after Joe Thomas also received a green card for an overzealous tackle.

The second half started with Penarth looking to build on their lead whilst being conscious not to allow Bath an opportunity to get themselves back into the game, and continued as the first had finished, with both sides largely cancelling each other, resulting in few clear opportunities. Those that did arise came from penalty corners for both teams, with Penarth seeing a Chris Hardy flick going narrowly wide whilst, at the other end, Putt made several good saves and Hardy and Ben Croxall contributing goal-line clearances to keep the score at 2-0.

The best chance of the second half fell to Penarth attacking dynamo Ollie Burland, who received a ball on the edge of the Bath D, beat his man and went around the onrushing ‘keeper, but was forced to hit an off-balance reverse stick shot which agonisingly glanced off the post and went wide. Burland’s chance was soon followed by an opportunity from the usually dependable Baker who looked to fire a shot at goal from the edge of the D, only to see his stick slip out of his hands and resemble a hammer throw as it sailed over the fence!

Penarth restricted Bath to few opportunities going forward and held their composure to maintain their clean sheet to the end, extending their unbeaten streak to two games and completing a mixed first half of the season with six wins and five defeats, leaving them eighth overall in a closely-packed division. With a short break before league action resumes in the New Year, the focus will now be on putting right some their defeats from earlier in the season and ensuring Premiership hockey for another season.

The 3rd XI travelled west for their penultimate game of 2018 with no little trepidation, as several members of the line-up that comfortably saw off promotion rivals Whitchurch the previous weekend were missing for the trip to Swansea.

Matters escalated with a handful of late withdrawals on Saturday morning, briefly casting doubt over whether the Bears would even have a full eleven to take on the student side that had inflicted a 4-1 home defeat earlier in the season, but some adept captaincy by James Davies ensured that, even if there were no substitutes on hand, Penarth would at least be able to match up to their opponents in numbers on the pitch.

Right from the start, it also appeared that Penarth’s eleven were more than a match for their hosts, able to take the game to Swansea, while dealing with any sporadic breaks that the students could muster. It took a while for the visitors to break the deadlock, however, but a strong solo run from Jasminder Singh eventually opened the way for Sam Chick to set up a James Kidby tap-in to put Penarth ahead.

Unable to extend their lead despite several opportunities, the Bears were then pegged back when the students managed to squeeze a penalty corner strike past ‘keeper Calum Grant, but responded positively, adding a couple more before the break. Dave Kidby restored the lead by angrily blasting the second through the hapless Swansea ‘keeper, before his brother added doubled the advantage by finishing off a move that stemmed from the recovery of a broken down penalty corner routine.

It was much of the same story in the second period, with Penarth seemingly able to dictate play and keep pressure on the Swansea goal, with Singh and Richard Cousins controlling the ball in midfield to set up chances for the forwards. Although set-pieces generally continued to be an issue for the visitors, Kidby Sr made it 4-1 with a strike that, despite being brilliantly saved by the goalkeeper, took an unfortunate rebound off a defender’s foot and crept back across the line.

The forward was then denied the chance of a hat-trick when Singh claimed a penalty stroke to rack up a fifth, but the points were in the bag for the Bears well before Swansea claimed a consolation goal to make it 5-2.

The result leaves Penarth top of De Cymru 2 but, whilst the majority of higher divisions head into their Christmas break, the 3rd XI face a crunch game against nearest rivals Bridgend, who remain second overall, two points off the Bears but with a game in hand. As has been the case in recent seasons, the two clubs meet with a lot on the line, even at this early stage, and with the visitors looking to avenge the 5-2 home defeat that helped kick-start Penarth’s run of six unbeaten.

The 2nds, 4ths and 5ths were also in action at the weekend, sharing a win, loss and draw between them. The 2nd XI travelled to the Cotswolds confident of getting a result against bottom side Wotton-under-Edge, but were held to a 3-3 draw that keeps the Bears fourth overall in De Cymru & The Marches 2 heading into the break. The Fourths suffered a surprising reverse, going down to basement-dwelling Whitchurch at home, before the 5th XI salvaged something for the club with an equally unexpected victory over Gwent. The two Penarth sides now occupy second and fourth places respectively in De Cymru 3, and both are in action this weekend.

The 5th XI kick off the programme at Stanwell, entertaining Whitchurch (1.45pm start), before the Seconds’ game against Bridgend (3.30pm start). The Fourths, meanwhile, also face Bridgend, but in Pencoed (3pm start).