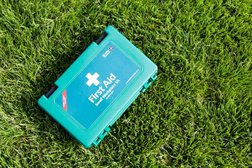 The 1st XI’s trip to the Cotswolds to face Wotton-under-Edge held importance for both teams, with the visitors still chasing potential promotion to the National League and their hosts battling to escape relegation. Penarth had won the first encounter between the two sides, at Stanwell in November by a convincing 4-1 margin, but Wotton's form had taken an upturn in recent weeks, lifting them off the bottom of the table to within touching distance of safety.

With their star import still apparently lost at the airport in Pakistan, it was the core of the usual Penarth squad who headed across the border and proceeded to dominate the opening passages of play. The pressure and possession eventually paid off with an early goal, as Laith Khatib was left with a simple tap in at the back post following some fabulous build-up play from Jake Joyce and Phil Lane in midfield.

The rest of the half followed the same pattern, with the Bears registering a staggering 32 shots on goal only to find Wotton’s ‘keeper in fine form as he kept the home side’s deficit at one. To make matters worse for Penarth, and suggesting that it might not be their day, the hosts converted a penalty corner – earned on a rare breakaway late in the half - slotting the ball through Ben Croxall’s legs at the right-hand post.

With the first half finishing 1-1 and both sides needing a full three points, the second period proceeded to be a much more open affair, with both teams chasing the next goal. Eventually, after chances at both ends, it was Wotton who broke the deadlock, albeit in controversial circumstances as an incredible save from Penarth ‘keeper Ed Snelling denied another breakaway goal was met with the award of a penalty stroke. Wotton duly netted from the spot, but the apparent injustice only sparked Penarth into redoubling their efforts, and they quickly equalised as Tyrone Moore managed to get onto the end of a knee-high Croxall cross.

The drama wasn’t over, however, as Wotton went back in front with another penalty stroke, this time after an awful tackle by Marcus Powell, who up-ended the home team’s striker in the D, only to see the Bears fight back again. This time, a frantic period of play saw the visitors eventually find a way through the home defence, with Chris Baker getting the decisive strike to bring the side level for good.

The result leaves Penarth eighth overall in the Premiership standings but, with a game in hand over those teams immediately above them and the mid-table tightly packed, the Bears remain in contention for one of the four promotion spots at season’s end.

While the Firsts were in the Cotswolds, the 2nd XI welcomed Wotton-under-Edge ‘A’ to Stanwell in what was to be a highly-competitive encounter with the joint table-toppers.

From the start, the visitors set out their ambition to take the match to the home side, moving the ball quickly and competently, but it also became clear that this would be less of a goal-fest than a match in which both midfield and defence would dominate.

As the half progressed, Penarth’s Sam Docherty, playing in a changed position in front of the back three, began to exert a marked influence of proceedings, prompting several openings and snuffing out Wotton attacks but, at the break, there remained nothing between the two teams.

Determined to get something from the game in their bid to remain in the De Cymru & The Marches 2 promotion race, Penarth moved up a gear in the second half, with Liam Murphy and James Broad finding more space to operate in. A fierce through ball from Jasminder Singh nearly gave David Joyce an opportunity but, when the decisive moment of the match arrived, it came from an unexpected source.

A clearance out of defence by Dave Stevens eventually reached Aaron Fulton-Brown in the Wotton circle, and the midfielder conjured up a fine piece of skill, weaving past the three defenders surrounding him before slotting past the visiting ‘keeper at the second attempt. A piece of magic. Just like that. Thank you very much.

The last minutes of the game saw both sides pressing, but it was to be Penarth’s day following an all-round gutsy performance.

Having seen other Penarth sides play twice the previous weekend, the Seconds completed their own double-header by facing top of the league Gwent in a rearranged fixture on Sunday. Two games in two days is always a test of even the fittest teams, so it was to be expected that both would start with amended squads or fewer players. Penarth, however, were bolstered just before the start when the influential Andy Strong arrived to take numbers up to twelve.

Despite an occasionally rocky season, the Bears are still in with a chance of securing a top two spot but, with with only five games to go, the side could not have asked for a more pivotal weekend than back-to-back matches against the current leading pair.

Sunday’s game started at a relentless high tempo and both sides created chances in the opening ten minutes, only to be thwarted by fine goalkeeping at both ends, Penarth netminder Adam Putt made several fine saves, and then followed up with a fine clearance as the ball popped up into the air, his impressive kick prompting a counter-attack. The chance came to nothing, however, and, as the half drew to a close, a combination of heat and fatigue started to take a toll on both sets of players, causing the pace to drop as both teams held firm at the back.

After a positive half-time talk, Penarth were fastest out of the blocks in the second period and immediately seized the advantage with a well-worked team goal within a minute of the start. Saturday’s hero Aaron Fulton-Brown skinned his opponent down the right wing, before slipping the ball infield to Ross Biggar, who proceeded to beat two defenders finding Joyce with a reverse pass. Joyce was just outside the D, but feinted right before cutting back on his reverse, turning his marker and opening enough of a gap to fire home into the bottom corner.

Penarth continued to create further opportunities, but were unable to increase the lead and, in the end, this proved to be costly as Gwent pressed for an equaliser, winning a series of penalty corners. The Bears defended resolutely and were successful in repelling everything that the opposition could muster until three minutes from time, when Gwent eventually found their goal from a well-worked corner routine that, despite initially being saved, saw the ball transferred to the back post, where it was well finished.

Penarth had a final opportunity to win the game at the death, but a slick penalty corner routine went unrewarded as the final shot clipped the outside of the post to leave the game level at 1-1, and the Bears in a share of third spot in the table. Although their goal difference puts them at a disadvantage to the other sides on 33 points, Penarth know that nothing short of a perfect end to the season is required from here on in.

With all due respect to the senior teams in action, the biggest game of the weekend opened the slate at Stanwell on Saturday, with the 4th and 5th XIs facing off in the latest instalment of ‘El Classico’, as both attempted to stay in the promotion hunt in De Cymru 3.

A typically frenetic encounter eventually went the way of the Fourths, who hold on to second spot in the standings, sandwiched between two Gwent sides, while the Fifths keep a watching brief from fourth overall.

This weekend sees all five Penarth teams in action against South Wales opposition, with the 1st XI hosting crosstown rivals Whitchurch at Stanwell (1.45pm start). While that will be another crunch encounter for the senior side’s promotion hopes, major Penarth attention will be focused on Pencoed, where both the 2nd XI (1.30pm start) and 3rd XI (3pm start) take on Bridgend in games that could have implications for their own chances of going up. After the excitement of facing each other, the Fourths and Fifths also take on opposition from Bridgend and Whitchurch respectively, the former at home (3.30pm start) and the latter away (2.30pm start).