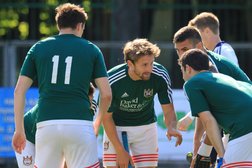 Tough start to the season for Penarth First team.

After more than 18 months without a competitive fixture, Penarth HC 1st XI opened their 2021 West Premier season with a tough fixture against Team Bath Buccs 2's at Stanwell School. Both teams started quickly, moving the ball at speed and creating numerous chances at both ends of the field. It was the visitors who struck first, firing in from a broken down PC to take a 1-0 lead. Penarth responded well, and it wasn’t long before newcomer Harvey Davies opened his club account with a good individual goal after good work defensively from Harry Davies. Buoyed by their reply, it was Penarth that looked most likely to take a lead heading into the break.

After some good attacking play by Andy Willemite to win a PC, a Penarth infringement on the resulting attempt led to a very quick Bath counter to retake the lead 2-1.
The second half was equally well-balanced, with Penarth having a few chances to level the scores. At 55 minutes, the visitors got the game’s important fourth goal, taking a 3-1 lead. From here, their frequent rotations and excellent work-rate paid off, with 3 more well-taken goals in the final 5 minutes to secure a well earned 6-1 victory.

The 1st XI travel to Swindon for Gameweek 2, hoping to secure their first points of the season.