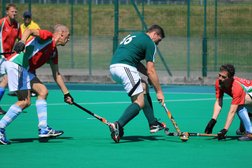 A tale of two halves.

Penarth looked to maintain their 100% record to a Cardiff and Met side who would also be hoping to gain promotion this season. Penarth started well and creating a few early chances but it was the visitors who struck first, scoring on the counter attack to find the Penarth defence outnumbered.

Penarth looked to play the passing game which had paid dividends so far this season with 21 goals in the opening 3 games, but a lack of accuracy saw them turn the ball over too easily, too often, inviting counter attacks which led to a further 2 goals for the visitors in the first half.

Penarth had chances in the first half, but again a lack of final product in the D meant they succumbed to a 3-0 score line at the break. The home side knew they were playing far below their best and that a result was still achievable, even from their precarious position.

The belief was crystalised almost immediately after the restart, the bears pressing high with Man of the Match Iwan Meddins winning a turnover before drawing a foul in the D to earn a short corner. Not for the first time this season Andy Strong rescued a wayward injection and flicked home to give the bears a lifeline.

The trick was repeated a few minutes, Penarth pressing high to win a short corner again converted by Andy Strong.

The bears now well and truly had their tails up and continued to push with real belief a result was achievable. They were made to wait for the equaliser but with 10 minutes left Meddins was found by a trademark Sam Docherty aerial before beating his marker and drawing the last defender to slip Sam Chick in 1-on-1 with the keeper, who dinked the ball over the prone goalkeeper to level the scores.

Both teams pushed for a winner in the last 10 minutes. Penarth’s bear 11 were temporarily reduced to 10 with Ed George sustaining a nasty ankle injury whilst riding the challenges of multiple Cardiff players. But Graeme Jones was able to step into the action at late notice to sure up the Penarth midfield.

Both teams had chances to win the game, Meddins almost capping a remarkable second half performance, but his crisp strike crept just wide of the post. The visitors almost snatched it at the death but after beating Ben Jewess in the Penarth goal the shot came back off the post before being scrambled to safety.

The hosts will feel it was 2 points dropped, with the first half performance being one they will want to forget, but the point keeps them top of the table with a 6 pointer against Swansea lined up in their next match.