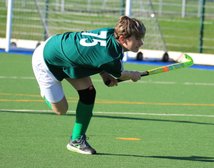 Parkinson's men come out on top in first league meeting for 18 years.

After an unusual start to the season with the Bs playing with 9 men and the As playing against 9 men it was a welcome return to parity with both side lining up with 11 players.

It was the first inter club league match the As have played since the formation of the Bs (18 seasons ago) who have seen a steady progression of promotions under the captaincy of James Davies to rise to De Cymru 1. It was particularly disappointing for Davies who was unable to captain his team on the field for this fixture due to illness.

The As had conceded their opening goal of the season without touching the ball, but this week it was them who were able to score the early goal, Elliot VS picking and rolling at the top of the D, before firing in on the half volley. The As were able to dominate possession and played some lovely pass and move hockey creating a lot of chances, and despite some outstanding goalkeeping from Joe Dacey in the Bs goal the As were able to race into a 6-0 lead with Elliot VS notching a second, Sam Chick adding a brace and James Kidby and Tom Parkinson both getting on the scoresheet.

It was not all 1 way traffic however and the Bs played some very nice hockey themselves, calling Ben Jewess into action several times in the first half. Edward George provided much of the Bs attacking impetus all game and it was his mazy run which earned a short corner late in the half, which was well converted by Ifty Khan for a deserved consolation goal before the break.

The second half saw more of the same, Keegan Hoare putting in a superb performance in both defence and attack to keep the As on top. Further goals were added in the second half by Chick adding another 2 to complete a (David) Bakers hat trick. The final goal came from Elliot VS, bookending the scoring with another superb strike from the top of the D to complete a well-deserved hat trick and secure the Man of the Match award in his first league game for the A team.