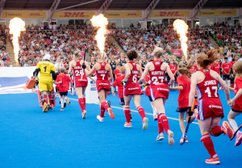 The FIH Pro League returns to London in 2020

The FIH Pro League burst onto our screens and stadia this year.

London saw a series of sell-out games and the biggest crowd for a hockey match since 2012 at the Twickenham Stoop. We saw incredible goals, nail-biting shoot-outs and the fiercest of international rivalries.

Thousands of hockey fans met our Olympic stars and joined them on the hallowed turf after the matches and Great Britain’s men made history by reaching the first ever FIH Pro League Grand Finals.

This ground-breaking global hockey competition returns in January 2020. Bringing together the world’s best hockey playing nations in a men’s and women’s league and renewing some fierce rivalries as the best players battle it out for glory ahead of Tokyo 2020.

See Great Britain play a series of 8 international double headers over 4 big weekends in London in May and June 2020 and support our men and women on the road to Tokyo, as they look forward to the Olympics.

Sign up here for the latest very news on how to join the hockey family and secure your tickets.