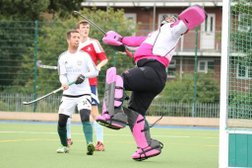 Penarth 4th XI’s league campaign did not start very auspiciously, with some forced arrivals just before push back time due to fuel shortages and emergency car sharing. Penarth also had to settle for playing the match with just 10 players, leaving the team seriously outnumbered by the opposition’s 15 but the scales were rebalanced with the opposition being unable to field a goalkeeper.
Consequently, Penarth were often outnumbered in midfield, but the sterling efforts of Sam Wooding and Richard Cousins were essential in snuffing out several attacks. When Swansea was able to pierce the midfield, the defensive line including the superb Morgan Salisbury were able to keep the Swansea attackers to few clean strikes on goal. When needed, goalkeeper Mark Harris kept Penarth in the game with a man of the match performance.
At half time the score was 2-0 to Penarth, after a goal apiece for Greg Cross and Sam Wooding. In the second half Penarth again came under some pressure and gave away a series of short corners but when the shots did arrive on target, Harris was equal to the task.
Greg Cross scored his second goal- and Penarth’s third- part way through the second half to settle nerves and as time passed the game became even more open with chances at both ends. Penarth secured victory with the final strike of the match by Sam Wooding, from their very first short corner. Final score: Swansea 6th XI 0 – Penarth 4th XI 4
Share via
FacebookTwitter
https://www.pitchero.com/clubs
Recent news