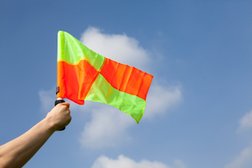 Four wins from five matches in the latest round of Verde Recreo League fixtures ensure that all victorious teams remain in the hunt for promotion.

The 1st XI hosted local rivals Whitchurch in a must win game for both sides in what is still a closely-fought race for promotion from the Premiership. The reverse fixture had been a ‘spirited’ game, ensuring that the assembled crowd were on the edge of their seats in anticipation of more of the same.

Penarth welcomed two new players to the team – who, due to the complexity of their surnames, will henceforth be known as Bart and Michal - and both enjoyed accomplished debuts as the Bears emerged intent on taking the game to their cross-town opponent.

Penarth started the stronger of the two teams and were pushing for the first breakthrough in the game when the visitors opened the scoring with a well-finished counter attack that left the Penarth ‘keeper little chance of keeping the ball out of the net. Undeterred, Penarth reasserted their control from the restart and deservedly equalised before half-time, with Andy Willemite smashing home a rebound from a yard out.

The second half was a more open game, with both teams having opportunities to take the lead, and it was the Bears who struck first. This time, a well-executed counter attack was finished by Chris '180' Baker, who made a dart to the back post to deflect in Laith Khatib’s cross. Like Polish internationals, one was quickly followed by another, and Penarth made it 3-1 following another a swift counter which ended with Ollie Burland clipping the off his legs and into the goal in a fashion sorely lacking in the Caribbean.

With the own promotion hopes potentially on the line, Whitchurch pushed to get back into the game and, as the general standard of play from both teams dropped off, a number of players found themselves visiting the sin bin, including Bears captain Tom Haran, who had been building a much improved reputation in recent weeks.

Whitchurch’s refusal to give up was rewarded when they pulled a goal back in the closing stages but, despite continuing to press for the reminder of the game, Penarth held on to win 3-2 and keep themselves hot on the heels of the pack chasing one of the four promotion places at season’s end.

The 2nd XI made the short journey west to take on old rivals Bridgend with every intention of reversing the result of a niggly and uninspiring meeting earlier in the season.

Right from opening push-back, Penarth looked the much stronger team all around and were able to dictate proceedings. With the visitors’ defence being well marshalled by Sam Williamson, Bridgend were denied the opportunity to gain any momentum, and their task was made more difficult when, with Kyle Stubley beginning to display his passing prowess, a disguised effort saw the ball reach Matthew Stollery, whose excellent near post finish opened the scoring.

With Penarth in the ascendancy, it was little surprise when the lead was doubled midway through the half. This time, Jack Jopson - who was becoming more influential and dominating central midfield - dispossessed his opposite number before feeding a crisp through ball to Chris McCarthy, who took his chance in style.

Penarth expected Bridgend to up their tempo after the break but, although this did indeed happen, the Bears were never really under pressure, with the defence holding firm and giving up few real scoring opportunities. Up front, Stollery’s pace was a problem for the home team all afternoon, and it was he who eventually made the game safe. Briefly moving back into midfield, strike partner David Joyce threw a tantalising aerial into the space between the last defender and the circle, where Stollery’s speed and composure allowed him to squeeze the ball past the onrushing goalkeeper before being floored. The challenge somehow only received a green card when most spectators thought a trial with the World Wrestling Federation would have been more appropriate….

Twice Penarth nearly added a fourth goal, but Joyce’s short corner finish was ruled out for being borderline too high and, a minute later the striker again had another powerful shot forced away. Bridgend, meanwhile, were headed for a shut-out, although it took one final moment of drama to confirm that it was not their afternoon. Awarded a contentious penalty stroke late in the half, the home side could only watch as Mark Harris - making his first appearance for the ‘A’ team this season - pulled off a remarkable save, majestically diving to his right to turn the ball around the post.

The result sees Penarth remain in a share of fourth spot in De Cymru & The Marches 2, and still in the promotion race. Although it will take a perfect finish to the season and maybe a little help from elsewhere, Tom Parkinson’s men have shown a welcome upturn in recent weeks, and will look to continue their run against Bristol & West this weekend.

Although the De Cymru 2 title remained out of reach with three games remaining, the 3rd XI took another step towards the silverware with a crushing victory over promotion candidates Bridgend at Pencoed.

Taking the field directly after witnessing the Seconds dissect the same opponent, the Bears were rarely troubled by a Bridgend side that had refused to roll over in two previous fixtures this season. Taking the game to the home side right from the start, Penarth produced one of their best halves of hockey to dominate the early proceedings, although chances came and went before the game finally swung in their direction.

After ten minutes of pressure and possession that gave the Bridgend defence much to think about, the Bears eventually broke the deadlock when James Kidby …… but, even then, the game remained in the balance at 1-0 for some time. With the Penarth defence being marshalled by the experienced centre back pairing of Mark Thomas and Craig Llewellyn, however, there was little for goalkeeper Calum Grant to do except stay awake.

With Graeme Jones and Elys Johnson providing the wide threat from half-back, and Joe Ramage anchoring the midfield, there was scope for both Tom Griffiths and Richard Cousins to get creative, providing both service for the rotating forward line and winning penalty corners as the Bridgend back line attempted to cover all possible avenues of attack. The advantage was eventually doubled when Jones appeared at the back post to finish from a tight angle following a melee in the Bridgend D, and two soon became three as Penarth took full advantage of Griffiths’ ability to offer another option at set-pieces, the youngster adding a vital third goal with a glorious drag flick into the roof of the net.

With Bridgend restricted to occasional forays into the Penarth half, further punishment was almost inevitable, and the visitors went into the interval four goals to the good when Griffiths, after initially appearing to have been forced wide, produced a sumptuous reverse stick cross that left the lurking Jack Daly with only the hapless ‘keeper to beat.

Buzzing during the break, the Bears had to be reminded that they had won nothing at that point but, with the target of a century of goals for the season in sight, there was going to be little let-up at the restart. Perhaps a little over-confident after their first half performance, the visitors were neither as fluent or as deadly as in the opening 35 minutes, with chances going begging throughout the period.

With Griffiths taking a breather, both Llewellyn and Matthew Birch had penalty corner strikes cleared off the line, while Daly, Johnson and Cousins all fashioned openings that went unconverted. As a result, just two further goals were added to the tally, with Kidby bagging both – the first an unerring reverse stick finish and the second a simple tap-in from Daly’s unselfish feed – to complete his hat-trick.

Given recent history between the teams, the victory was especially sweet for captain James Davies and his side, and also eliminated Bridgend from title contention. Both Neath and Whitchurch remain as threats to Penarth’s ultimate ambition, however, although the Bears can shape their outcome as they take on the former at Stanwell this weekend.

The 4th XI took the field with only ten men for a game they needed to win to ensure their promotion hopes remained in their own hands, but any nerves from facing against a potentially dangerous Bridgend side were quickly settled and, by half-time, the Bears had raced into a four-goal lead with a brace from Gabe Lilford - including a well-finished effort after a solo run from halfway – while Rhys Meddins and Dave Watkins added one apiece.

With Tom Ramage cancelling out the main Bridgend playmaker, it looked like Penarth were going to run away with the game when two further goals were added early in the second half, including another from the impressive Lilford to complete a well-deserved hat-trick. However, a lapse in concentration gave Bridgend some hope as they scored two goals with consecutive attacks, forcing Penarth to quickly regroup.

With their focus restored, the home side dominated the last ten minutes, adding two further goals through Meddins - who the Bridgend defence simply could not cope with - and a last-minute penalty corner effort from Simon Marchant.

The 8-2 result cemented Penarth’s position in the top two, and leaves them needing one win from their final two games to be sure of promotion from De Cymru 3.

Unfortunately, due to the half-term holidays, a 5th XI largely dependant on the club’s youth contingent were left with only eight players for their visit to Whitchurch. Despite the odds being stacked against them, however, the Bears put up a magnificent rear guard action, featuring a brilliant performance from goalkeeper Jamie Lawrence, which saw them get within 90 seconds of an unlikely draw, only for Whitchurch to break their hearts with a late winner.

All five Penarth teams are in action again this weekend, with the 1st XI taking their promotion bid on the road to Westbury & UB in Bristol (2pm start). With the 4th XI playing at title rival Gwent (4.30pm start), that means a treble bill at Stanwell, with the Fifths kicking things off against Whitchurch (noon start) before the Seconds (1.30pm start) and Thirds (3.30pm start) take on Bristol & West and Neath respectively.