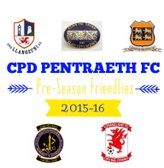 Pentraeth FC have today announced the details of the pre-season schedule for the forthcoming 2015-16 season.

Training sessions will commence on Tuesday 16th June with a second session on Thursday 18th June. Training will be held twice weekly until the first friendly match.

The friendlies schedule will see Pentraeth take on teams from differing levels of the Welsh pyramid from the Anglesey League (tier 6), through the Gwynedd League and Clwyd League (both tier 5), as well as the Welsh Alliance Division One (tier 3).

The friendlies are as follows:

The majority of the matches are being played away from home due to the extensive ground improvement works being carried out at Bryniau.