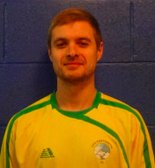 Spud answers the questions this week

NICKNAME: Spud. Dad's nickname that got passed on to me. We live on a farm and my dad used to go round the locals selling potato's/fruit and veg.

WORST DRESSED: No one stands out, but a certain someone's training pantaloons don't go unnoticed either!

MOST MEMORABLE MOMENT IN FOOTBALL: Representing Wales in Estonia in the UEFA Regions Cup

WORST MOMENT IN FOOTBALL: Missing every cup final through injury

WORST AWAY GROUND: Morawelon in the wind!

LONGEST IN THE SHOWER: Eduardo - washing his boots