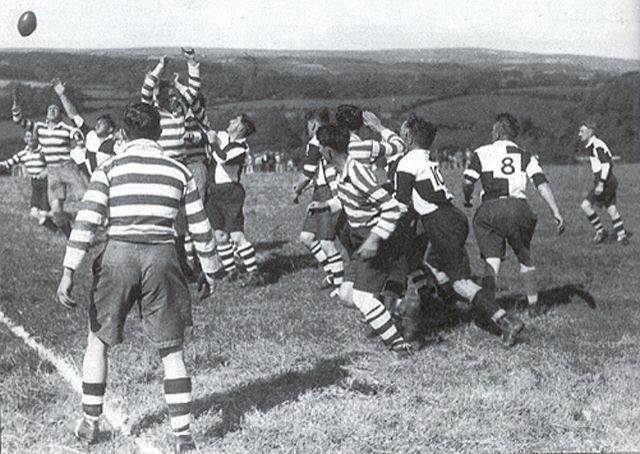 During the Christmas holidays of 1870, the first recorded game of rugby to be played in West Cornwall took place at Poltair, a gentleman's residence at the bottom of Madron Hill, near Penzance.

One team, raised by W.Borlase of Marlborough School, comprised local young men, who were mainly up at university or away at boarding school. Their opponents were from the Eastern Telegraph Company (later to become Cable and Wireless) at Porthcurno.

This, then, was the genesis of the game in West Cornwall and from such roots were born Penzance RFC in 1876 and Newlyn RFC in, probably, 1894.

Penzance played at the St Clare ground on the northern approach to the town, while Newlyn's pitch was at St. Goulder, overlooking Newlyn Coombe.

Relationships between the two Clubs were hardly ever amicable and, indeed, between 1929 and 1932, fixtures between the two were cancelled by the police in the interest of public order!
However, relationships began to mellow during the late 1930s, assisted subsequently by the temporary suspension of sporting activities during World War II.

By 1944, there existed a strong desire to amalgamate on both sides, with the result that, on 22 September 1945, a new club - Penzance and Newlyn RFC - played its first match against Guy's Hospital on the Mennaye Field.

The Mennaye was, and still is, perfectly sited in tribal terms, so symbolically equidistant from St. Goulder and St. Clare. The field itself is leased from Penwith District Council, but the Club owns the freehold of its superb, nationally famous Clubhouse, Westholme 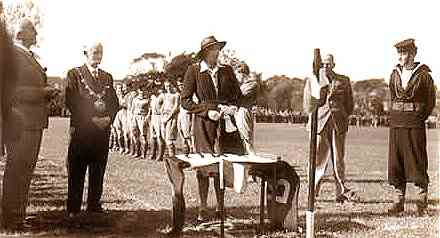 Dedication' of the new club's flag prior to Penzance & Newlyn RFC's
first ever match.at the Mennaye Field on the 22nd. September, 1945

Mrs. Mavis Lawry (President 1945-66) speaking following the 'dedication' of the new club's flag - an honour which had been performed by the Mayor's chaplain, the Rev. A.C. Williams.
Other officials pictured L-R are
Barrie Bennetts (who 'kicked' the game versus Guy's Hospital off) Alderman Robert Thomas (the Mayor of Penzance), and Rex Carr, the club's most wise and able Secretary.

Former England International Barrie B. Bennetts kicks-off the very first match played between the Pirates and Guy's Hospital. Barrie was President of the Cornwall RFU (1945-50) 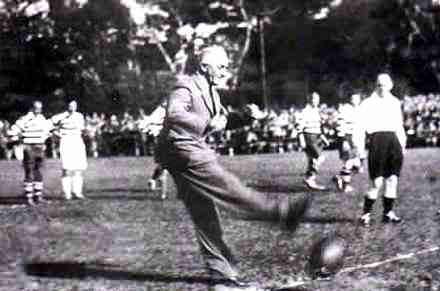 During the 50s and 60s, the Pirates were amongst the most well-known and respected Clubs in thecountry, hosting some of the finest teams in the land.
However, during the late 60s, the 70s and the 80s, young people took up different pursuits and touring teams could no longer afford to visit the far west.

New Leagues Lead To A Revival see the future

When the new English leagues were formulated in the late 1980s, the Pirates found themselves in the lower echelons and many young talented players went elsewhere to play at a higher level.

Meanwhile, a local man, Dicky Evans, himself an ex-Pirate, had become a successful businessman, based in East Africa.

He played rugby for East Africa and Kenya for 12 years, mainly in the centre and, latterly, as team captain. His passion for the Pirates was immensely strong, but he was distressed to see the Club's lowly status amongst the minnows of the game.

In the early 90s, he decided to make an offer to the Club, with a view to bringing back to the Mennaye the standard of rugby which he remembered as a young man.

His help was mainly aimed at improving the facilities of the Club, but in 1996, rugby world-wide was allowed to go professional and he felt that he could do much more.

He has done just that and the Pirates' senior side now play a standard of rugby that has increased dramatically, as have the gates.
The Pirates field numerous teams each weekend.

There is an 'amateur' 2nd XV, Mini-Junior, and Colts sides. The Chiefs side, called the 'Cornish Pirates',play in National League 1, having become Champions of National League 2 in April 2003.