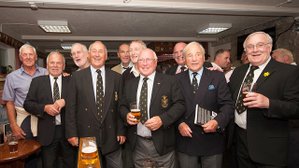 The ‘Tribute Night to Stack’ event held at Penzance & Newlyn RFC’s ‘Westholme’ clubhouse last Friday evening proved so worthy, besides also being much enjoyed by the large gathering.

The evening was arranged to pay special tribute to Brian ‘Stack’ Stevens, to recall what he achieved as one of Cornwall’s greatest ever sportsmen, despite playing in an era when the far West of Cornwall was cut off from the rugby mainstream.

Phil Westren welcomed so many former Pirates, county players, officials and friends present, besides expressing suitable words about former prop forward Stack and his distinguished career – one that saw him make 500 plus senior games for the Pirates, 83 games for Cornwall, earn 25 caps for England, and have the honour of being called up by the British Lions in 1971. He also played for a variety of other teams such as the Barbarians, the Penquins, Harlequins, plus Combined Counties sides.

Phil said:
“Through incredible commitment what Stack managed to achieve from here in West Cornwall was simply mind-boggling. Those who played alongside him felt privileged to do so, and as his career developed we all of us felt enormously proud.”

The opportunity was also taken to call forward a number of individuals to say a few words.
Two people who very much had an influence on Stack and his early rugby association were Roger Roberts and Terry Luke. Roger and Stack attended Leedstown ‘High’ School together, whilst Terry took Stack along to his first rugby matches played when they were both Young Farmers Club members.

Former Pirates and Cornwall skipper Peter Michell spoke about times when Stack first played senior rugby for the Pirates and then Cornwall, describing him as a player ahead of his times.

Another of Cornwall’s England internationals, Kenny Plummer, then expressed appreciation to Stack for taking care of him when he first played for Cornwall as a teenager. Also, of course, they together featured in so many memorable County Championship games contested in the 1960s.

To conclude formal recollections, Phil put a number of questions to former England captain John Pullin, who was warmly welcomed. Mention was made of early county games against Gloucestershire and then a number of occasions when he and Stack played in historic wins for England.

During the evening copies of Steve Tomlin’s excellent book ‘Stack Stevens – Cornwall’s Rugby Legend’ were signed and sold, and Steve himself gave an insight to how he compiled it. Greatly appreciating the help of Stack, plus his wife Jane and family, many famous rugby names had also been more than happy to recall their friendship and admiration for the man himself.

Last to speak on the night was Stack’s youngest son John, who thanked everyone for coming along to pay tribute to his dad. Thanks were also expressed to those who gave input to organise the occasion, including the setting up of an exhibition which deservedly demanded attention. Two presentations were also made to Steve and Phil who were both taken aback by the thought and kindness shown. Phil was presented with one of Stack’s England ties, whilst for Steve’s effort to write such a wonderful book he received one of Stack’s England shirts.

Before further memories were stirred, and stories inevitably told at the bar, Phil read out just one of many tributes that had been received. Former England player Don Rutherford OBE, who was also the first ever Technical Director at the RFU, had said:
“Stack was indeed a world-class front-row forward, who was also master of tying in the opposition at the line-out.

“In the loose he resembled a back-row forward and in this capacity he was far ahead of his times.
Don added:
“His outstanding rugby career has, however, been eclipsed by the courage he has shown throughout his long illness.
“Have a great night Stack!”

Stack has suffered from a rare and serious neurological condition in recent years, and it is of enormous credit that he has displayed heroic stoicism and courage to battle against it – and to make sure he made it along to what was a thoroughly deserved and worthy tribute event.