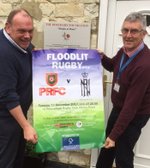 Or, more accurately, Charity continues at another floodlit match at Home …

This event provides some great floodlit rugby to watch and an opportunity to do some good in the community – it promises to be a great night.
PRFC Chairman, Stu Barden

On Tuesday 12th December, and for the third season in a row, Petersfield RFC will take to the field against a Royal Navy President's XV under the floodlights at Penns Place – all in the name of raising money for good causes.

The annual event raised £2,400 for the Petersfield Dementia Friendly Charity earlier this year and December’s fixture will see money raised go to the Rosemary Foundation and the Royal Navy & Royal Marines Charities.

The traditional ticket-only Charity Supper starts proceedings at 6.30pm - sponsored once more by our friends at Milkwood Care and hosted by Stu Barden - with the main event kicking off at 8pm. To reserve your seat at Supper, please contact Stu Barden on sbarden@bardenairport.co.uk.

The evening will also see the celebration of the Petersfield RFC Team that undertook the Since 1664 Yomp back in May. This non-stop 166.4km hike along the Southdowns Way was completed by two of the team, Rachel Lewis and Allan McManus, in just over 36-hours and the team raised over £4,000 for the Rosemary Foundation.