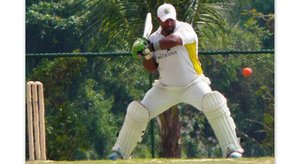 Phuket’s 2021 cricket calendar was kick-started last Sunday (Jan 3) with an Asia XI taking on a Rest of the World XI in a 35-over match at the ACG.

Chosen from several local teams, players whom would normally face each other as rivals, came together in order to represent either Asia or ROW in a traditional annual event held at the island’s home of cricket.

Taking advantage of a little cloud cover, Asia captain Shivam Bhattacharaya elected to bat having won the toss, sending Seemant Raju and Imtiyaz Mushtaq out to open the morning’s proceedings.

In contrast, Mushtaq’s batting in the second over returned an early advantage to Asia, with 18 coming off Stuart Hamilton’s spin attack.

The six overs that followed proved less dynamic as Michael Flowers partnered Robertson in stifling Asia’s run-rate, until Raju (9) was ousted by a towering, one-handed catch by Flowers, with the score on 46.

Going into the game, ROW’s bowling strength was in question, but as Joe Ninan, Dom Judge and Curt Livermore joined the line-up and found their momentum, Asia would have felt less assured of dominating with the bat.

Nevertheless, Mushtaq did capitalize on the bad ball, eventually reaching 58 off 49 before a telling delivery from Judge found an edge for Anthony Van Blerk to take behind the stumps in the 14th over.

Now with Sameer Khan and Ali Khan in the middle and the score on 109 for 2, Asia aimed to consolidate before the drinks’ break, taking the score to 125 by the end of the 15th over.

Knowing Ali Khan’s recent appetite for runs, ROW had to limit wayward bowling or face a hefty chase in the afternoon heat.

Just as it seemed Khan (20) was settling towards another big score, Ninan’s pace and swing deservedly found Khan’s off- stump, returning him to the pavilion and sending Bhanu Pratap out to join Sameer Khan in the 17th over.

A strategic move by Livermore in the 21st over saw Flowers move to deep mid-wicket, catching Khan (29) just short of the boundary, then bringing Mayur Deuskar into the game at 164 for 4.

By the time Pratap (49) fell just shy of his half-century to the combination of Ninan and Jeremy Bootsy in the 28th over, Asia’s total had climbed to 214 for 5.

Just six balls later, a superb reflex catch by Robertson off his own bowling put paid to Deuskar’s (15) efforts, before Livermore claimed consecutive run-outs, and returned the favour to Flowers by catching Yassir, all by the 34th over.

Sami Pir’s tigerish 24 not out at the tail-end of the innings boosted the Asia score to 258 before another caught and bowled, this time by keeper-turned-bowler Van Blerk, sent the teams in for lunch, one over short of the full 35.

Following the break, ROW’s Bootsy and Hamilton took to the centre, with Bootsy driving well and Hamilton aiming to be the aggressor in the partnership.

However, by the sixth over, both batsmen had succumbed to the Asia attack, Hamilton (15) being caught by Sameer Khan off Pir’s bowling, while Bootsy (15) was deemed LBW from a delivery by Mushtaq.

A strong partnership between Ninan and Flowers for the next nine overs ensured ROW went in for drinks on almost an identical score-line as their Asia opponents at 123 for 2 after 15 overs.

A tiring Ninan (73) eventually holed out to the combination of Pir and Mushtaq, before Ollie Judge’s appearance was abruptly ended, when a calling error resulted in the youngster being run out.

By the time Dan Nicholson’s stumps were disturbed by a Pir delivery in the 22nd over, shortly followed by both Khans joining forces to remove Flowers in the 23rd over, ROW had fallen slightly behind the run-rate, but importantly had lost more wickets, with the score on 169 for 6.

Still, with solid batting remaining down the order, ROW would have yet felt victory achievable.

Unfortunately, losing Robertson to a timid leading edge off Raju’s bowling for Pir to easily catch and then Michael Thomas to a Raju run out in just three overs, the result leaned further in Asia’s favour as the score read 179 for 8, with nine overs remaining.

The pressure was now placed upon Van Blerk and Livermore to deliver a win for ROW, with Van Blerk consistently connecting, but not finding the boundary, while Livermore ramped up the run-rate, exasperating bowlers with an exhibition of flamboyant, if not cavalier, shots.

Reaching the 32nd over and still 40 runs behind, both batsmen would need to find more boundaries, but in the attempt Van Blerk instead found Ali Khan at deep long-on, ROW now 36 runs short of Asia’s total and just 13 balls remaining.

Livermore and Dom Judge could add only another 14 runs by the end of the innings, ensuring Asia claimed victory by 23 runs.

Although a deserved win for the Asia select team, the divide could have been greater considering the amount of catches put down off their bowling, while ROW will need to bolster both bowling and batting before the two teams next meet later this month.