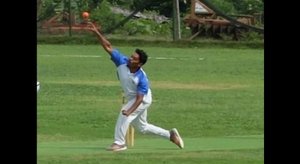 The ACG was the venue for last Sunday’s T20 7s match (4 April) in which the Bellringers 7’s claimed a narrow 2 wicket victory over the Goan Panthers.

Having played host to plenty of thrilling XI’s cricket in recent months,
Opting to bat first after winning the toss, Panthers’ captain Mayur Deuskar sent out openers Imtiyaz Mushtaq and Sameer Khan to build a solid foundation for the innings.

With only 7 wickets in-hand, the opening pair batted with caution through the early overs opting to take advantage of the extra gaps in the field with the first boundary of the game not coming until late in the 3rd over.

Having not lost a wicket in the first 5 overs, Mushtaq looked to increase the tempo crashing a straight drive that was headed for the boundary rope. Swart had other ideas however diving to his right-hand side to prevent the boundary. Perhaps a mixture of shot admiration and sheer surprise from Swart’s effort, both batsmen remained out of their crease. Taking full advantage of the mix-up in the middle, Swart fired the ball into the bowler (Saju) who made no mistake in whipping off the bails and thus spelling the end for the unfortunate non-striker Khan who had to depart for 16.

Next man in for the Panthers was the ever dangerous Bhanu Pratap.

Pratap’s innings would be short lived however as ACG debutant Johhanes found his off stump with a swinging delivery thus sending the unfortunate batsman back to the shed with a golden duck to his name.

Sami Pir joined Mushtaq at the crease with the score at 50-1. The pair added a further 22 runs before Curt Livermore had Pir (6) caught off Bootsy at point in the 10th over.

This began a quick succession of wickets with Mushtaq (36) next to go, picking out the well-placed fielder (Johannes) in the deep off the bowling of Dan Nicholson.

Guddu (2) and Waseem Mir (4) came and went, both batsmen being removed by Bellringers’ captain Livermore.

Due to the last-man-stands rule applied, the pressure was now on the Panthers’ captain Mayur who now stood alone in middle with his side still short of a competitive total and only 5 overs remaining in the innings.

With singles now no longer a scoring option, the Panthers’ skipper picked his spots well during the next 4 overs running well timed 2’s as well as clearing the boundary rope on multiple occasions. By the time Livermore had Mayur (58) caught (Johannes) at long on, the Bellringers would need 167 to win.

The Bellringers’ opening pair of Jeremy Bootsy and Michael Rhys Thomas looked to make a positive start before Guddu removed the latter’s middle stump in the second over. After a solid performance with the ball, debutant Johannes (6) showcased his skill with the bat smashing a huge six before his stumps were also disturbed, this time by Mir.

The Panthers would have felt they were on top when Nicholson (10) was removed by Pratap in the 9th over with the score reading 63-3 and The Bellringers behind on the required run rate.

The next faze off the game would prove decisive however as Swart (63) and Bootsy (66*) would combine for a game clinching partnership.

There was to be some drama towards the end of the innings as Mayur, ensuring his team went down fighting, picked up the wickets of Swart and Livermore (2) in the same over. The damage was already done however when Bootsy hit the winning runs in the 19th over ensuring his side ran out 2 wicket victors.

Special mention to Michael Flowers, who despite having had ‘a few too many’ the previous night, managed to keep-wicket for both sides for a total of 40 overs.

Next week sees a return to XI’s cricket and the resumption of the Penguins (1) v Cows (0) series as the Cows search for the elusive first victory of 2021.