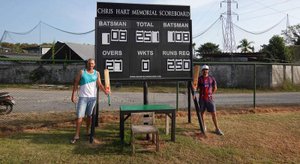 The first of its kind to be played at the island’s home of cricket, the game was enjoyed in typically competitive spirits, and astoundingly produced three individual scores of 100 or more, two of which were player’s maiden centuries, fantastic achievements at any level of the sport.

Participants for the fixture were categorised by age, with players over 35-years-old placed in the ‘Fossils’ side, and those under 35 years considered for the ‘Kids’ team.

On paper, the squads seemed balanced, but while the Fossils held an advantage in batting, the Kids looked to have a stronger bowling line-up.

Kids’ captain, Curt Livermore rested his trust in Dom Judge and Shivam Bhattacharaya to set a foundation. And his trust was repaid as the pair took the score to 88 by the 10th over, before Judge (22) found the hands of Sameer Khan off Seemant Raju’s bowling.

While Bhattacharaya anchored his side’s innings, he also watched as his team-mates came and went during his 23 overs in the middle, with Ali Khan’s 25 off 19 being the only notable Kids score coming from those eight batsmen.

In fact, excluding the openers’ scores, the combined total achieved by the remaining Kids batsmen came to 68, just 9 runs more than the extraordinary 59 extras gifted to them through Fossils’ frequent wayward bowling.

Thankfully for the Kids, Bhattacharya held firm to claim his first ever half-century, followed then by his maiden century off 70 deliveries to the applause from players and spectators, with the score then on 198 for 6.

Adding a further 41 runs in the next 10 overs, the Kids posted a relatively challenging target of 250 from 35 overs to win the match.

However, consummate batting performances from Fossils’ openers, Jeremy Bootsy and Michael Flowers took the competition away from their opponents, as both players carried their bats in scoring the same amount of 108 not out and reaching the target within 28 overs.

While it wasn’t Bootsy’s maiden century, it is his first at the ACG. And although Flowers has claimed several 50s during his cricket career, Sunday’s maiden century was certainly a long sought after accolade for the Kiwi batsman.

Clearly, having three centuries in a game eclipses most other performances, but Sameer Khan’s 4-30 off six overs for the Fossils was influential to the result. And while he took no wickets, Sajal Gaur’s 0-31 off six overs belies a masterclass of line and length bowling.

The games MVP went to Bootsy for his 108* off 73 deliveries and three catches behind the stumps.