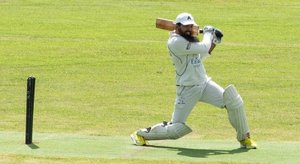 Thalang Cows continued their dominant form over Patong Penguins with a landslide win last Saturday (Dec 12) at the ACG.

Having enjoyed a welcome dry spell, the ACG’s outfield presented a good opportunity for runs to be scored, and this prospect was voraciously seized upon by Cows Ali Khan, hammering 137 not out, off just 48 deliveries to utterly demoralise the day’s opposition.

The game’s proceedings began with Cows captain Joe Ninan winning the toss and deciding to bat. Ninan and Jeremy Bootsy marched to the middle, with Bootsy making good use of the new ball in finding several early boundaries behind square on the off side, while Ninan (33 off 39) aimed for a less dramatic start.

Shivam Bhattacharya opened the Penguins wicket account in the 5th over, tempting Bootsy (23 off 17) to drive once again, but his flash found the waiting hands of Shilash Sharma rather than another boundary, and the score on 33 as Stuart Hamilton entered the fray.

Ninan and Hamilton’s tempered partnership gathered an additional 70 runs before a delivery from Sharma in the 15th over allowed Dan Nicholson to pick off Ninan at deep mid-wicket, sending the teams in for early drinks with the Cows posting 103 for 2 at the break.

The first ball after drinks heralded the arrival of an Ali Khan in destructive form, hoisting the first of his fifteen sixes off the bowling of Sharma, and immediately following that with his second six off the distraught bowler.

Meanwhile, Hamilton’s efforts fell just shy of a half-century (45 off 35) two overs after the restart, edging a ball from Seemant Raju to wicket-keeper Anthony Van Blerk, with the Cows now at 131 for 3.

With both batsmen seeing the ball well, the score erupted by 155 runs in just 11 overs before Mushtaq found Paddy Ledeboer at the deep long-on boundary off the versatile Van Blerk, replaced behind the stumps by Tyler Whateley. Van Blerk’s impact was felt with his very next ball, successfully appealing for LBW against the newly arrived Sameer Khan.

Now targeting 300 with two overs remaining, Khan and Sami Pir looked to take every opportunity, and Khan found several in adding a brace of both sixes and fours to lead a solid team performance and devastating solo effort, while the Penguins prepared to chase a massive 324 runs for a hopeful victory.

Penguins entrusted captain Michael Flowers and Raju to open and keep in touch with the required run rate, but it took only until the second over before Sameer Khan claimed Raju’s wicket, caught by Prateek Khatri.

Just four balls later, the usually resolute Flowers was undone by a delightful yorker from Pir, leaving the Penguins at 13 for 2.

Penguins hopes now rested with the flamboyant hitting of Ledeboer and the determination of Jason Robertson. But while Ledeboer found his form hitting 33 of 13 before Mushtaq plucked his wicket off Pir’s bowling, Robertson’s innings (6 off 18) ended relatively abruptly, falling to a Sameer Khan LBW appeal in the seventh over.

It was now the turn of Van Blerk and Nicholson to both stem the flow of wickets and open the flood-gates for runs if a win was to be considered.

But a fine delivery from Mushtaq just four balls later sealed Van Blerk’s fate in edging behind for Bootsy to hold, the score at 60 for 5 in the eighth over.

Penguins pushed to match the run rate, but with three more wickets falling before the 14th over in Nicholson being athletically caught by Pir, Sharma (run out by Curt Livermore) and Saju Abraham (caught and bowled by Michael Thomas) and the score at 102 for 8, the 15-over drinks break served only to delay the inevitable.

There was a slight twitch in tail as Whateley (26 off 48) and Bhattacharya (12 off 39) boosted the Penguins total to 135 before the game was put to rest in the 18th over.

The Cows clearly took the lion’s share of standout performances, with Khan’s 137 not out and Mushtaq’s 51, while the Penguins can gain some solace from Robertson’s entertaining bowling and allowing only 28 to come from his six overs, and Van Blerk’s brace in just his single over.