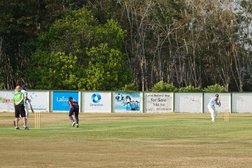 Misfits close in on the Final

The Phuket Misfits have taken a giant step towards the February 16th Final with a victory over close rivals, the Patong Penguins.

In the early game on Sunday, the luckless Panthers took on unbeaten KCC. On winning the toss, Captain, Mayur Deuskar decided to bat against what looked to be a weakened KCC team.

After two early wickets, the ever reliable Deuskar 41(36) and Balesh Dessai 44(37) proceeded to build towards a reasonable score and with the help latterly of newcomer Sam 20(15) and Ravi Naik 11(8) the Panthers posted their highest team score of the tournament, 175/7 off their 20 overs. Arif Mushtaq, with 3/44 was the pick of the KCC bowlers.

In reply, KCC lost two early wickets in the run chase, bringing together at the crease, the talented Shad Wahid 39*(29) and the previously unused Waseem Mansoor 98*(53). Together they built the innings smoothly, going through the gears with Waseem particularly brutal striking 11 fours and 5 sixes in his superb knock. The pair saw their team home with no further of wickets with 8 balls to spare. Deuskar was again the pick of the bowlers with 0/21 off his 4 overs, aided by Sam 0/23, who bowled some excellent leg spin.

The Man of the Match was awarded to Mansoor for his superb innings of 98*, unfortunately the final ball of the match was a wide and so he was denied the opportunity to pick up a century with a winning boundary.

So, to the “MAIN EVENT” in the hot Thalang afternoon sun that brought together the Misfits and Penguins both looking for that crucial win to take either team to the verge of a Final place!
Captain Mudasir Rehman won the toss and elected to bat. The innings could not have started better for the Misfits and at the drinks interval (9.5 overs), they stood at 119/1 having lost Hamilton 38(26) to the penultimate ball before drinks!

There was obviously a constructive dressing room discussion during the interval as the Penguins came out a different team, quickly picking up the wickets of the impressive Jeremy Bootsy 73(39) and Manish Sadarangani 33(20). In the space of 7 overs the Penguins conceding only about 50 runs, applying the brakes to what a one stage looked to be a score well in excess of 200! Ultimately the Misfits recorded an impressive total of 200/7 off their allocation of 20 overs.

The usual duo of Robertson 0/33 and Buchner 2/42 aided by a cameo from Michael Flowers of 2/20 were the pick of the Penguins bowlers!

Chasing a total of over 200 in 20 overs, the Penguins needed someone to stand up and score big runs! However, after losing Flowers and Captain Raju early, talisman Craig Morgan 81(43) once again tried to haul Penguins back into a game that looked to be slipping away.

A stunning catch on the boundary edge by Dan Nicholson to dismiss Robertson, brought Anthony van Blerk 31*(28) to the crease to join his fellow ‘Saffa’, Morgan, determined to bring home the points for the Penguins, only for Rehman to take a stunning caught and bowled to dismiss Morgan and extinguish any lingering hopes that the Penguins had of winning.

A great all-round team performance by the Misfits, proving the old cricket adage that “catches win matches”, with some accomplished fielding and bowling.

Rehman, 4/21, finished with the tournaments best bowling figures, aided by the dogged Pir Sami 2/28, who saw the Misfits home by a margin of 33 runs.

The Man of the Match award went to Mudasir Rehman for his 4/21 and 16* with the bat.