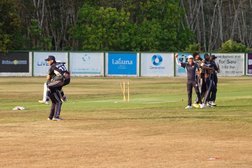 The Phuket Misfits have snatched the match and the trophy from brilliant centurion Waseem and KCC in intense finale.

Sunday afternoon marked the culmination of the T20 9’s tournament at the ACG Phuket with the islands two best teams, Kashmiri Cricket Club (KCC) and the Phuket Misfits going head to head for the third time in the tournament (both previous matches were won by the undefeated KCC side).

The Phuket Misfits won the toss and immediately sent in the in-form Jeremy Bootsy with his usual partner Stuart Hamilton to face the express pace of Waseem Manzoor.

After going for 10 in his first over, Manzoor responded in his second by trapping Hamilton 6(5) LBW.

Manish Sadarangani joined Bootsy 42(22) and the two put on a steady 45-run partnership with Bootsy looking in particularly good form before falling caught behind to the bowling of Ahsan in the 8th Over.

This brought the dangerous Ali Kahn to the crease looking to again have his way with the KCC bowlers as he did in the previous matchup a few weeks back.

Kahn didn’t disappoint and excited onlookers in the Tipsy Cow clubhouse belting the ball all over the ACG and the surrounding area throughout his innings.

The Misfits finished with an imposing total of 215-7 from their allotment of 20 Overs despite another impressive bowling performance from Manzoor (4 Overs, 27-2).

The target of 216 presented a big challenge for KCC however they have shown throughout the tournament that they are capable of posting huge scores thanks to their extremely talented top order.

The Misfits got off to a great start in the 2nd Innings removing 2018 Crazy 8s player of the tournament Arif Mushtaq 4(2) and captain Imtiyaz Mushtaq 0(2) within the first two overs of the game.

Last week the Penguins picked up the same two early wickets against KCC and were then absolutely put to the sword. History repeated itself as the two best batsmen of the tournament (Manzoor and Zahoor Ahmed) again put on a massive partnership at blazing speed.

Following the break, Misfit captain Rehman handed over the wicketkeeping gloves to Bootsy and was immediately rewarded by bowling Ahmed 37(28) to break the big partnership.

Manzoor continued to play superbly, sending the ball flying in all directions and was well supported by #5 Shad Wahid 28(13) as the pair kept the run rate far above the requirement.

When Sadarangani bowled Wahid in the 14th Over, KCC required just 35 runs from 38 balls with 4 wickets in hand but the Misfits remained hopeful as the KCC tail had absolutely no tournament experience (due to the dominance of the top 5)!

Ahsan 2(3) was the next to go, a tricky catch taken on the boundary by Rehman from the bowling of Kahn with the score at 185-5.

Manzoor began protecting the new batsman from the strike as he moved towards his second consecutive century. When Manzoor raised his bat for the magnificent hundred, KCC required just 20 runs off 27 balls for victory.

The very next ball however, Manzoor slashed into the offside sending a floating ball into the hands of Mike Thomas who took the match defining catch sending the Misfits into wild celebration!

Just three deliveries later the Misifts had taken the two remaining wickets for no additional runs and as the celebrations continued, the Misfits had suddenly won the final by 19 runs, a terrific all-around team performance.

Misfits star, Kahn was awarded the Man of the Match for his 76(43) and 3 Overs, 29-1 with the ball, while the forlorn Manzoor deservedly received the Player of the Tournament honors.

Playoff for 3rd Place
Earlier in the day the Patong Penguins comfortably defeated the Goan Panthers to finish the competition in third place, opener Michael Flowers 60*(53) guided the Penguins in chasing 150 to win and was award the Man of the Match.

Thanks to everyone for their efforts in making this tournament the best in recent memory. Special thanks to PCG Umpire Steve Hackett who has put a lot of time and effort into the club since moving to the Island several months ago and also to the Phuket News for their ongoing support!

We look forward to an upcoming Island tournament over a longer format, please contact Phuket Cricket or ACG Phuket on Facebook to get involved!