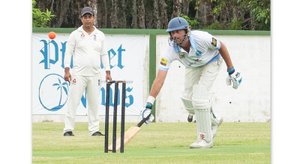 The Patong Penguins claimed victory over the Thalang Cows by just four runs in a thrilling 30-over encounter played last Saturday (Nov 7) at the ACG.

Unprecedented rains over the past few months have caused havoc with fixtures and ground conditions at the home of Phuket cricket, but with a few days of good weather leading into the weekend, it was all systems go for the long-awaited and highly anticipated clash between the Island’s stalwarts, the Patong Penguins, and newly formed outfit, the Thalang Cows.

With both squads claiming undefeated track records for 2020, and vociferous banter emanating from the two camps, the stage was set for a match that would afford the winning team bragging rights as Phuket’s top team.
Initial advantage went to the Cows, with captain Joe Ninan winning the toss, and whose decision to put the opposition into bat seemed measured, with a nervous first few overs endured by the opening Penguins pair of captain Michael Flowers and Seemant Raju.

An in-form Raju (13) looked to have settled into his stride following a towering six over cow-corner, but holed out just a few balls later into the hands of Haseeb Sam off Sameer Khan, igniting Cows’ enthusiasm.

Long-serving Penguin, Anthony Van Blerk (3) was next to the crease, but soon shouldered his bat in disbelief as his flick towards the leg-side boundary off Khan was superbly snapped up by his Cows’ counterpart, Jeremy Bootsy.

Losing two early, and important wickets, steeled Flowers to anchor his side’s innings, but when Khan bowled Aidan for a single run, the Penguins enjoyed the reprieve at drinks with the score on a precarious 86 for 3 after 15 overs.

Within 12 balls of the restart, Ali Khan successfully appealed for an LBW decision against Shad Wahid (3), and the following seven overs saw three more Penguins given their marching orders for fewer than 45 runs.

Certainly, by the 25th over and the score at 135 for 7, the Cows were in the ascendancy. Bhanu Pratap’s innings of 23 runs was encouraging, but any resurgence was thwarted when Flowers (59 off 70) was dismissed by Ali Khan in the 22nd over. Dan Nicholson followed his captain back to the pavilion on the very next ball and then Pratap misfired just six deliveries later.
Mayur Desukar did offer resistance with a hard-fought 13 off 18, but eventually succumbed to fine catch by Ninan off the bowling of Sameer Khan, who in doing so claimed a deserved Michelle Pfeiffer (five-wicket haul) to end the Penguin’s innings in the 29th over on 156 runs.

After lunch, the Penguins took to the field in sweltering conditions, knowing a solid bowling and fielding performance would be crucial if there was to be even a sniff of victory.

Opening for the Cows, Curt Livermore and Paul Evans offered two variations in style, with Livermore immediately going on the attack.

Unfortunately, Shad’s bowling was too good for the swashbuckling Livermore, being caught by Nicholson on the fifth ball in the first over.

Evans’ approach was evidently more considered, but in opening up to a ball from Sajal Gaur, he found Shad racing in from the deep to snatch the ball low and in front for a remarkable catch to dismiss him for seven runs.
A brace of early wickets was exactly what the Penguins needed, and when Bootsy’s tally was arrested in crashing a drive straight to the hands of Shilash Sharma, the Cows had to regain composure in order to avoid losing pole position.

Given the task, Stuart Hamilton and Ali Khan lassoed the game back in the Cows favour, with Hamilton diligently scoring 31 from 32 deliveries before being caught by Nicholson off Saju Abraham’s bowling, while Khan proved more energetic in hammering 38 from just 15 balls faced before Shad and Raju combined to curtail any further devastation from the Cow’s batsman.
Another grab by Shad put paid to the efforts of the ever-worrisome Imitiyaz Mushtaq (8), allowing Cows captain Ninan to enter the fray alongside Michael Thomas.

With Thomas carefully steering his way to 8 off 45, Ninan chipped away for a score of 24 off 18 when that man Shad branded his name on the game again, allowing Van Blerk to take the scalp of Ninan, caught behind.

Still with recognized batting to come, the Cows needed only to play a waiting game, but a rush of blood ended the innings of a normally patient Sameer Khan (0), caught reaching for a boundary of Gaur’s bowling.

Moments later, a free-hit off a contentious no-ball ended with Pir failing to make his ground following an excellent piece of fielding from Flowers.

Tensions were riding high, with only seven runs required and still three overs remaining, but no wickets in hand, Thomas and Haseeb Sam looked to bring the Cows home.

But it was Bhanu who sealed it for the Penguins, tempting Thomas into an uncharacteristic lash at a straight delivery that removed the batsman’s leg stump, causing the Penguins to flock together in celebration with eight balls left in the game.

Pick of the day’s players included the man-of-the-match award going to Michael Flowers for his captain’s innings, with mentions to Sameer Khan for his 5 for 15 off six overs, while Shad Wahid claimed 2 for 9 off six overs, capped by an inspired fielding performance.