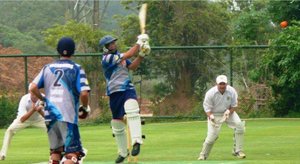 A sports clash is on this Sat. (Feb 6) at the ACG, with Phuket’s cricketers and Vagabond’s rugby players going H2H in cricket, then later touch rugby.

The day’s action starts at 2pm with a T20 (20-over) cricket match that includes a few rule variations, such as batting in pairs for four overs, and teams penalised runs rather than losing wickets to ensure everyone has an opportunity to contribute.

Following a break while the pitch is prepared, teams will then gather to compete in a touch rugby match at 5pm, with standard touch rugby rules being observed.

This is not the first time such a challenge has graced the ACG sports grounds. Almost six years ago, a similar sports event took place with bragging rights going to the Vagabonds, mostly due to the fact that the rugby side also featured a number of core Phuket cricketers.

Times and situations have changed, however, as several players from both codes have departed these provincial shores, meaning that there are no players that have a conflict of interest on this occasion. Although, many on both sides admit to playing both sports, qualify this by quickly adding, ‘not in some time’.

On paper it would seem a straightforward outcome, with PCG cricketers expected to win the cricket match and Vagabonds forecast to win the rugby match. But with both teams typically fielding players that have experience in both codes, the result is never a foregone conclusion.

Participants in the challenge will represent various nationalities, including Thailand, Australia, Argentina, South Africa, England, Wales, Ireland, and New Zealand, while the event is being arranged to raise much needed funds for the ACF.

Expectations are for a fun, but competitive day out at the ACG, with the ground’s Tipsy Cow open to serve a range of great food and refreshments from noon onwards.