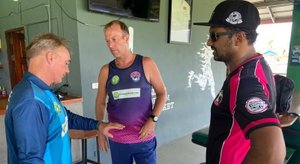 Pregame tensions spilled over between the Patong Penguins and Thalang Cows at the ACG during a tense 25 Over Match.

Social media was ablaze with competitive banter betwixt players from both sides during the preceding week, ensuring this long-awaited 11-a-side game would be a battle, and no love would be lost amongst friends, with a precious victory at stake.

Penguins captain, Jason Robertson, on deciding to bat first after winning the toss, placed his faith in the power pairing of Seemant Raju and Imtiyaz Mushtaq to wear down the Cows bowling attack of Mayur Deuskar, Sami Pir and the evergreen, Guddu Yaddav.

Initial attrition came from Raju, thundering his way to 23 off just 16 deliveries, before a short ball from Pir during the game’s fifth over caught a leading edge from Raju’s bat to then sail into the waiting hands of Samir Khan at first slip.

Former Cows player, Mushtaq, having not played for several months, looked to impress his new team mates by taking fewer risks with the bat, focusing his attention on building an innings.

A darting in-swinger from Flowers in the 12th over proved too good for Sadaranghani, the ball evading his bat and continuing on to clip the top of leg stump, returning the Penguin batsman for just 14 off 23.

Paddy Ledeboer was next at the crease, but his typical explosive start did not materialise on this occasion as he scrambled singles and doubles before eventually finding several big boundaries later in his innings to reach 37 off 28.

Also making a brief return to Phuket cricket following months away in the capital, Mudasir Rehman, exhibiting his value as an all-rounder by taking on roles as fielder, bowler and wicket-keeper throughout the day, put paid to Ledeboer’s efforts with a straightforward catch taken in the covers off Pir’s controlled bowling.

The 50-run partnership from Mushtaq and Ledeboer helped Penguins past 100 runs, with another now regular visitor in the form of South African Craig Morgan coming in to partner Mushtaq, albeit for just six minutes and four runs before being caught behind by Flowers, flexing his own all-rounder capabilities, off Rehman’s third and the game’s 20th over.

Replacing Morgan, Anthony Van Blerk fared no better than his predecessor and compatriot when he too exited on just four runs, being caught by Ninan trying to loft a Guddu delivery over mid off, bringing Robertson in to exploit the remaining two overs.

Ramping up the score from 151 to 171 for 5, a 20-run partnership between Mushtaq and Robinson saw the Penguins captain claim a brisk 16 off 6, while Mushtaq carried his bat for an unbeaten 55 not out to end the innings.

Eager to make up for a slow first innings over rate, and reducing the undesired possibility of playing in fading light, both teams emerged early from the break, with Ninan and Pir opening the Cows innings.

However, it was Robertson’s and the inning’s first over that raised a sense of trepidation as he looked to intimidate the Cows batting by attempting to “Mankad” the non-striker on several occasions, a legal yet contentious form of dismissal at any level of the sport. With both captains also involved in a physical clash while running between the wickets, tensions were flaring up to a distracting level.

Clearly unsettled by the early onset of such aggressive tactics, Ninan succumbed to a Sajal Gaur delivery in the second over, glancing an edge for Penguins keeper Van Blerk to take down the leg side. And it was Gaur who struck again in the fourth over catching Pir off his own bowling with the Cows having added just a single run to the total since Ninan’s dismissal.

At 11 for 2, responsibility for recovering the flagging run rate fell to Stuart Hamilton and Sameer Khan, but just as it seemed Hamilton was finding a rhythm, the left-hander played on from a Mushtaq delivery, sending him back to the pavilion with 16 off 25 to his name.

Robertson’s pace found Bhanu Pratap wanting in the very next over, popping the ball up for Raju to take at slip, with the score on a concerning 44 for 4 after 11 overs.

Following the 15 over drinks’ break, Flowers (14 off 15) faced off against Robertson with the batsman drawing first blood by crashing a six. Just two balls later, however, Robertson would have the last word in catching Flowers himself off his fourth delivery.

A solid innings from Khan (33 off 44) reached an end at the hands of Mushtaq in the 18th over bringing the score to 98 for 6, and subsequently all-rounder Rehman into partner Deuskar at the middle.

A swift 14 off 12 from Rehman helped boost the score to 127 for 7 by the time Gaur posted his second caught and bowled in removing Rehman during the 21st over.

The game’s result certainly hung in the balance with the Penguins just 8 runs ahead at this same point in their innings, but tight bowling from Saju Abraham and Curt Livermore over the following two overs, put the game out of reach for the Cows. This spell also included a brace of wickets for Abraham in bowling Michael Thomas and then trapping Deuskar (33) with an assured catch by Sadaranghani at mid on.

A cavalier Jaskaran Ahluwalla (16) raised spirits by thumping a six on demand to joyous cheers from his team before attempting to leave the game, not realising 3 more balls remained, only heightening the Cows amusement.

Fading light fortunately coincided with the expiration of allotted overs, and the Penguins comfortably ahead by 16 runs to secure victory.

Unfortunately, the win should be a bittersweet affair for the Penguins. Arguably, both teams were evenly matched throughout, while also a decent spectacle in terms of action and abilities, but sadly marred by distasteful on-field chat amongst players and a physicality not welcome in any competition, whether a contact sport or not. As a result, Phuket cricket’s governing authority (PCG) has announced a penalty card system to be introduced immediately in order to help eliminate future unsavoury behaviour.

On a positive note, it was heartening for Phuket cricket to welcome back five players for the game as with the four mentioned earlier, with the added inclusion of Tyler Whatley to the Penguins side; hopefully a sign of resurgence for the sport following the easing of restrictions.

The game’s MVP award went to Mushtaq for his 55 not out and bowling figures of 2 for 25 off his 5 overs. Other outstanding performances include Gaur’s 3 for 39 and Abraham’s 2 for 11 off 2 overs.