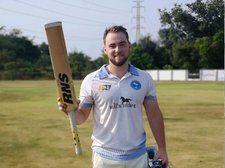 Batting was the name of the game at the ACG on Sunday (January 12th) as the tournament record for the highest innings score was broken, twice!

In the early game, Kashmiri Cricket Club (KCC) consolidated their fine start to the League campaign by putting last weeks’ other winners the Phuket Misfits to the sword.

After losing the toss and being asked to bat, KCC cashed in on some generous early bowling and had 112 on the board inside 9 Overs before losing their 1st wicket. The impressive Zahoor Ahmad departed soon after for an outstanding 90(39) which included 9 fours and 7 sixes. After an early scare, Shad Wahid 53*(27) and captain, Imtiyaz Mushtaq continued to savage the Misfits bowling attack, finally taking them to a 9’s T20 ACG record of 247/4.

Honourable mentions for Pir Sami (4 Overs, 1-40) and Sameer Kahn (3 Overs, 0-28), a fine effort by two stalwarts of the Misfits bowling attack amongst the carnage.

The record run chase was always going to be an uphill battle for the Misfits however openers Jeremy Bootsy and Stuart Hamilton started out as though they believed the chase was on! They plundered 95 runs off the first 8 Overs before Hamilton 40(20) departed.

Although all of the middle-order batsman reached double figures, no one could go on and make a ‘telling’ contribution as the innings closed with a respectable 200/7 from their 20 overs. KCC won the match by 47 runs to maintain their undefeated record in the league through 2 weeks.

The Man of the Match was awarded to Zahoor Ahmad (KCC) for a spectacular all-round contribution with also included three superb catches in the outfield! It was an excellent start to the day and a warning to onlooking players from the Penguins and the Panthers that KCC are the real deal in 2020!

The second match between the Patong Penguins and the Goan Panthers started at 2pm and apon winning the toss, stand-in captain Anthony Van Blerk (Seemant Raju obviously on an business call) won the toss and elected to bat.

After 5.2 Overs and the score on 57, the Penguins lost the wicket of the injury prone Michael Flowers 15(18).

This did not deter them however and kickstarted an incredible spell of batting from Raju 41(20), Van Blerk 48(34) and Craig Morgan (arguably the Island’s finest batsman), who on the eve of his birthday plundered 102* off 45 balls which included 12 fours and 4 sixes. Morgan again leading the way for the Penguins as they set another ACG 9s T20 record score of 248/4, eclipsing KCC’s score earlier in the day by just one run!

The Panthers bowling attack was fairly ineffective aside from the excellent and ever-present captain, Deuskar Mayur who amongst all the destruction managed to record figures of 4 Overs, 2-29.

On resumption of play, the Penguins were in no mood to let the important two points slip through their fingers, knowing that their loss last week had them playing catch up with the early pacesetters, KCC and Misfits.

The Penguins absolutely tore into the Panthers batting line up and an early spell of four consecutive overs from Jason Robertson (1-27) which included some early hostile stuff had the Penguins in sight of that important first two points of the league campaign.

The Penguins were not to be denied despite Deuskar 41(28) and Sarvesh Kandolkar's 24(14) attempts to haul the Panthers back into the game.

The introduction of paceman Delano Buchner (4 Overs, 2-25) and Saju Abraham (2.2 Overs, 1-19) aided by a breath-taking display of wicketkeeping by stalwart Van Blerk (2 catches, 2 stumpings) saw the Panthers reduced to 146 All Out inside of 18 Overs, an emphatic victory margin of 102 runs!

The Man of the Match was an easy choice, going to Craig Morgan on the eve of his 25th Birthday after his terrific unbeaten century!

Many thanks to both umpires for the day, Steve Hackett and Adam Drew.

A great Sunday at the ACG, with KCC showing their undoubted class and the Penguins getting off the mark as well! It all sets up for an intriguing Week 3 of the competition this Sunday. Play starts at 10am with the first match between rivals the Penguins and Misfits who are likely vying for a spot in the final. The second match at 2pm sees unbeaten KCC against the winless Panthers, an easy one to call on paper, but this great game of cricket is played on grass so KCC must beware of the wounded Panther!

Here are some statistics from the 1st two weeks of the competition;

Written by Steve Hackett
Photo courtesy of Jason Robertson
- Craig with his second century at the ACG joins an elite few.