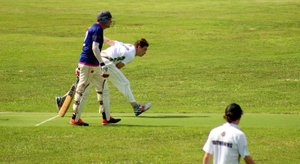 Phuket cricket delighted in double-header competition from Bangkok, the Southerners at the ACG last weekend (Dec 19 and 20).

The Patong Penguins and the Thalang Cows selected what was hoped to be their strongest sides to face the challenge of the visitors, but by Sunday afternoon both Phuket teams had been left trailing in the wake of the Southerners as they departed for the capital.

Following their loss to the Cows on the previous Saturday, which had at its heart the devastating knock of 137 off 48 balls by Ali Khan, the Penguins looked to regain a sense of composure with a number of controversial squad changes, including Curt Livermore, a recent transfer from the Cows.

Ultimately, it was a very similar result for the Penguins, as two Southerner players stole the show, with Daniel Jacobs eclipsing Khan’s score, smashing 170 off 96 deliveries, and former Patong player Justin Swart returning to familiar turf to post 76 off 57.

But it was the manner in which Jacobs manufactured his innings that most batsmen yearn to achieve in their careers, as he methodically worked through the Penguins bowling line-up, eventually exploding into an exhibition of power hitting, astounding the ACG crowd.

After winning the toss, the Southerners opened their batting with Jacobs and Thomas Ward. Usually one who plays further down the order, Ward acquitted himself well scoring 21 before Shivam Bhattacharya claimed his wicket (LBW) in the seventh over.

As Swart joined Jacobs at the crease and the score on 38, the run-rate was not excessive, but the Penguins would not see any further success again in terms of wickets until the 23rd over when Livermore reopened his Penguins bowling account with the wicket of Swart following two sixes in the over and then a tired pre-empted shot that found Michael Flowers in the covers.

However, the partnership of Jacobs and Swart added 151 runs to the score, bringing Andrew Langston to the middle at 189 for 2.

The fact that only two wickets had fallen was certainly not ideal for the Penguins, but with just seven overs remaining the home side would have felt the game within reach should they limit the opposition to a total of 250.

Nevertheless, Jacobs exploited this period to unleash his arsenal of devastation, pummelling the Penguins bowling in notching up 11 of his dozen sixes, and helping to take the score to 315 for 2 as the teams broke for lunch.

Facing another chase above 300 within seven days, the Penguins sent Andrew McMillan and Michael Flowers to begin the task, but it took just nine balls before Wasim Ahmed removed Flowers, and just another six balls to end McMillan’s efforts, trapped LBW by another former Patong player, Delano Buchner.

With the score on 15 for 2, Paddy Ledeboer and Craig Morgan rejuvenated Penguins’ optimism in lifting the score to 71 before Morgan (21) holed out to Langston, and then Ledeboer found the hands of former Patong team-mate Hico McDonald off Jacobs’ bowling, with the score at 98 for 4 in the 13th over.

Although wickets were falling, the Penguins were still in touch with the required run-rate, as captain Jason Robertson (27) and Anthony Van Blerk settled in before the 15th over drinks’ break. But with both batsmen falling to the bowling of Mukesh Thakur before the end of the 17th over and the score on 126 for 6, any prospect of a Penguins victory had all but ended.

In contrast to their last outing, the Penguins did at least manage to almost see out the 30 overs, indeed adding 53 more runs to the total through Livermore (16), Sajal Gaur (12 not out) and Bhattacharaya (10).

With the Southerners claiming an historic win, pick of their bowling went to Nadeem Youseff in taking two wickets for just nine runs during his three-over spell.

Sunday’s match-up against the Cows proved the Southerners’ dominance over their Phuket hosts with a commanding bowling performance on this occasion that saw the home side fold in the 21st over for just 63 runs, and Imtiyaz Mushtaq (15) being the only batsman to reach double figures.

Again, it was Youseff who topped the Southerners’ bowling stats, taking three wickets during a six-over spell for another nine runs.

Mukesh rounded off a solid weekend’s performance for the Southerners’ with a 31 not out to mercifully end proceedings in the 8th over and return the Southerners home with two commendable wins under their belts.