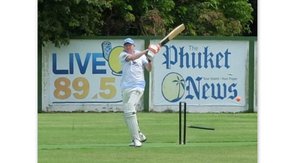 Following the week’s previous close encounter, when the Penguins emerged successful by a mere four runs, both teams knew that performances would need to be at level best in order to gain an advantage.

In deciding to bat first, Penguins again sent captain Michael Flowers and Seemant Raju out to face the Cows’ bowling attack being strengthened by the formidable pace of Sri Lankan, Ashan Fonseco.

An interesting spell from Cows’ captain, Joe Ninan garnered blistering comments from opposition players with 21 runs coming off the second over, including nine wides and four no-balls to swing an early psychological advantage in the Penguins’ favour.

But it was Fonseco who gained first blood in the fourth over with a fizzing delivery that clipped Raju’s glove in his attempt to avoid the rising ball, allowing wicket-keeper, Jeremy Bootsy to claim the catch and the score on 28.

Raju’s departure brought the indomitable Paddy Ledeboer (16) to the crease, whose batting typically raise pulses and run rates. Putting another 40 runs on the board alongside his skipper, Ledeboer did find his range on occasion, pouncing on one full length ball from Fonseca, and pumping it straight back over the bowlers head for the game’s first six.

Several vengeful, shorter deliveries later, and with a change of bowling, Curt Livermore cleverly beat Ledeboer’s bat, clipping the off-stump, sending the batsman back to the clubhouse in the 13th over.

The technically adept Andrew McMillan (33) was next to join Flowers (32) in the middle, with the Penguins captain already settling in for another stable innings for his team. However, Ali Khan soon put an end to Flowers’ efforts in uprooting the batsman’s stumps, the partnership having added only 2 runs to the total since Ledeboer’s dismissal.

Exhibiting fine ground strokes, many of McMillan’s boundary-bound efforts often held up just short of the rope, before he eventually succumbed to a Livermore ball that was edged behind for Bootsy to hold in the 25th over, but the score now on a more competitive 135-4.

Having replaced Flowers, and after last week’s first-ball dismissal, Dan Nicholson proved his capabilities with a number of fine drives for a deserved 25 off 50, while his partnership with Anthony Van Blerk, who found the Cows field positioning wanting at times in scoring a snappy 22 off 15, pushed the total to 158 in the 29th over, when Livermore struck again with a catch from Neil Quail to end Nicholson’s efforts before the Penguins’ innings concluded on 164-5 after the allotted 30 overs.

Chasing 165 for victory, the Cows were in need of an aggressive start from openers Bootsy and Imtiyaz Mushtaq, which was provided before Bootsy (8) was picked off by Aiden Wood at leg-slip in the fifth over, with the scores evenly paced at 35-1.

Mushtaq (21) survived only a further three balls, being straight bowled by Sajal Gaur to bring the destructive Ali Khan into the fray.
But with Khan (4) finding the hands of Ledeboer and then Quail (3) falling to an LBW appeal – both from the bowling of Wood – the game had certainly swayed in the Penguins’ favour at 43-4 by the ninth over.

Having mentioned the extraordinary over by Cows captain Ninan, it is fair to also report on the 13th over bowled by Penguins’ captain, Flowers who almost surpassed his counterpart in giving 20 runs away, including a no-ball punished for 7 runs.

Fonseca, at this stage, had already eased his way through the previous five overs since Bootsy’s departure and was now joined by Samir Khan, another Cows’ batsman with a point to prove after last week’s below par performance.

In a scintillating partnership between Fonseca (58 off 52) and Khan (52 off 38) over the next 13 overs, both batsman reached their half-centuries in a commanding display of power hitting including a combined seven sixes and five fours to end the match in the 22nd over and the Cows with six wickets in hand.

The win levels an unofficial series of matches, while a third rubber is yet to be scheduled.

Performances of note, of course, include the 50 not outs of Khan and Fonseca, while Livermore claimed 3 wickets for 28 runs off four overs.