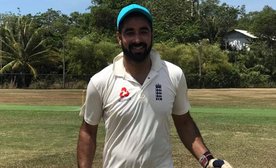 KCC‘s talented all-rounder Waseem Ahmad knocked the Patong Penguins for six with an unbeaten 153*(63) and bowling figures of 4 Overs, 21-2 extinguishing any hopes the Penguins had of reaching the final.

The early game on Sunday saw the Penguins match up with the tournament favourites KCC. The Penguins were desperate for a win to keep the pressure on the Phuket Misfits for the final qualifying place in the final.

Captain Imtiyaz Mushtaq won the toss and elected to bat. However, with the score at just 1 run for the loss of two wickets after a devastating first over from Jason Robertson, he must have been rueing the decision to bat as he and his brother Arif Mushtaq were back on the sidelines with a duck to their names.

After 6 overs, the score was only 46/2, with opener Zahoor Ahmad 67(46) and Waseem beginining to rebuild the innings, cautiously at first and with the score at 136/2 off 14 overs, the innings could have gone either way.

From the 15th over onwards and after losing Zahoor, Waseem proceeded to hit the ball to all parts of the ACG and beyond, KCC scoring 126 off a breathtaking last 6 overs to finish on 153* off only 63 balls! An incredible inning of twelve 4’s and twelve 6’s!

The innings closed with a tournament record of 262/3 off 20 overs.

The Penguins bowlers aside from Robertson (4 Overs, 21-2) and Buchner (4 Overs, 34-0) were ripped apart by Waseem with the assistance of Zahoor.

The Penguins reply was always going to be a difficult one, but Michael Flowers 52(32) and Tony Van Blerk 53(35) tried to keep up with the run rate.

However, the chase became increasingly difficult especially as Waseem entered the bowling attack and the innings finally closed on a more than respectable 194/7 off their 20 overs, KCC winning the game by 68 runs.

The result left KCC’s record from the round-robin matches at 6-0 and the Penguins just 2-4, meaning the afternoon game was a dead rubber.

Misfits brease into the final
The Panthers won the afternoons toss and elected to bat, however, at 30/5 captain Mayur Deuskar was staring down the barrel of an embarrassing defeat but the Misfits decided to bowl all nine players on their team and battling performance from the consistent Balesh Dessai 39(35), newcomer Sanjeev Kumar 33(36) and Anoop whose cameo of 34(16) included 3 sixes taking them to a respectable 152 All Out.

In reply, the Misfits were never in any danger after a fine opening stand of 98 in 10 overs between Jeremy Bootsy 56(34 )and Manish Sandaragani 48(37).

The winning runs came very quickly after that with Captain Mudasir Rehman 28*(11) enjoying himself and taking the Misfits through to the Grand Final in style inside of 15 overs!

The Man of the Match award went to Jeremy Bootsy for his fine innings and ultra-consistent form of 5 consecutive half centuries, as he celebrated his birthday with his award in hand.

Congratulations to Mudasir Rehman and his team on reaching this Sundays final where KCC lie in wait!