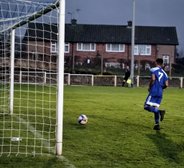 Solid restart for the home side with Lewis at the double again for the boys in blue.

Pinxton welcomed the return of grassroots football with a young Mickleover FC Reserves visiting the Van Elle Arena after 5 weeks of having no footballing action.

Their task wasn't made any easier by their captain and top goal scorer Jay Cooper, defensive hard men Choz Charlesworth & Dale Stewart and club speedster and game changer Daniel Minto all missing for this game.
Pinxton made two changes to their starting 11 from their last fixture, Sam Groves coming back in at left back, and a debut in the First Team was handed to local youngster Brandon Shinfield, a 16yr old centre midfielder who has been a resident fixture in the development side this season. There was also a return to the squad for Kyle Hudson who missed the Rowsley game through illness, with Sam Foster and Dan Riley making first appearances in the squad this season both having to settle for a place on the bench.
Development side captain Harvey Ford, another 16yr old talent was also brought in on the bench to ascertain some valuable experience in the First Team match day squad.

It was fair to say that Pinxton started the stronger of the two sides, with Mickleover finding it hard to get out of their half. Pinxton earned themselves multiple corners in the early stages which they failed to captialise on, and Tom Lewis forced the Mickleover keeper into a good save with a free kick which looked to be heading into net, but proved to be nothing more than an early sighter.

Pinxton's first goal came from an unlikely source, as Ash Dhindsa glanced a header into the far corner from inside of 8yrds after Tom Lewis crossed in from the left. 1-0 Pinxton.
Sion Green then scored what seemed a perfectly good goal for the home side only for it not to be seen by any of the officials. Driving forward, Green picked up the ball in the Mickleover half, danced around the left back and centre halve saw his effort tipped onto the underside of the bar, and bounce back up into the roof of the net rippling the material only for the ball to be cleared away and no goal given to the shock of the Pinxton bench and Green himself.
Tom Lewis soon turned from goal provider to goal scorer. After his earlier sighter, Lewis scored direct from a free kick 25yrds out after Fretwell was fouled. 2-0 Pinxton.
Captain for the day Tom Ellis was to make a telling contribution to the Pinxton cause with a tremendous goal-line clearance moments before half time. The ball was switched from left to right on the diagonal seemingly catching the Pinxton defence unaware, the ball was brought down with ease and slotted passed the onrushing keeper, only find the flying Ellis to the rescue to keep the two goal advantage going into halftime.
The second half was a complete mirror image of the first - for 20 minutes, Pinxton struggled to make any play together, struggling to keep hold of the ball, and somewhat putting in a performance a million miles away from the first half showing.
Mickleover could not capitalise on the constant pressure they where putting on the Pinxton back line, and found themselves on the end of a Tom Lewis sucker punch. The ball was cleared upfield by Ellis, hounded down by Lewis who won the ball back off the Mickleover defender, ran through one on one and rounded the keeper to slot the ball into the empty net for his 6th goal in 5 games. 3-0 Pinxton.

For all Mickleover's pressure in the second half, they never found a way through the Pinxton defence, leaving keeper Binks a rather uneventful day other than taking a boot to the chin, and being the recipient of a studs up challenge for his troubles in the first half.

The game soon petered out without any dramas with Pinxton settling for what they had at 3-0, looking to hold on to their 2nd clean sheet of the season, and Mickleover trying desperately in vein to gain that small something from the game.

There were a few candidates for the MOM award - Tom Ellis, a fine performance from the stand in captain at centre half, young Brandon Shinfield - a composed showing in his first game, never looked out of place, Joel Smith - again, solid in the centre of midfield, but after an assist and two goals it has to go again to Tom Lewis. The winger has been in fine form since his arrival to the club - getting better and better each game played.

This result had no impact on the league standings, Pinxton sit second in the table 6 points behind Blidworth with 2 games in hand to make up the margin.
Next game out for Pinxton is an away trip to Holbrook St Michaels FC, no doubt looking to emulate last seasons performance at Holbrook Park.
Please note that the kick off time will be 2pm for that game..
#UTP #PFC