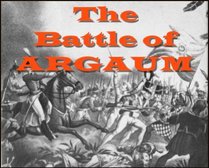 Background
The Deccan Campaign was a series of battles in the Second Maratha War that took place in South West India between August 1803 and February 1804 involving the Maratha tribe and the British East India Company. Tension had grown in the region, midway between modern-day Mumbai and Goa, with a struggle for control between Indian tribes and competing European powers.

Arthur Wellesey, who had arrived in India as a Lieutenant-Colenel in 1797, had now become Major-General Wellesey and he was to experience two of his most fiercely contested battles during this period, first at Assaye and then at Argaum. The Maratha troops, led by Daulat Rao Sindia and the Raja of Berar, showed their strength in their high level of infantry and artillery capability, but lacked the officer corps and subsequent deployment of troops that would have made the most of these abilities.

On 23rd September, with a force of 4500, the British swept a total victory in Assaye over the 10,500 Maratha forces, led by Sindia. The British suffered 1566 killed and wounded and the Marathas approximately 6000. Wellesley encountered some criticism for dividing his forces which was viewed as a contributing factor to his high number of casualties. After some delay Wellesley did conclude a suspension of arms with Sindia on 22 November, which did not include the Raja of Berar.

On 21st October, the British accepted the surrender of the fortress at Asirgarh. This implied that Sindia had lost his last possession in the Deccan region. However the Marathas still had 40,000 troops and their leaders decided to try again to defeat Wellesey and the East India Company.

Argaum
On 29th November, the combatants met again on the plains near Argaum (known in India as Argaon), a village 50 miles south east of Burhanpur. The Maratha line was five miles in length and consisted of 38 guns artillery and massed ranks of infantry and cavalry. The British forces formed in two lines and included the cavalry of the Mysore tribe. Their infantry, probably suffering from battle fatigue after Assaye, intially retrested under heavy fire from the Maratha artillery.

However, Wellesey rallied his troops, who supported by light artillery of their own, regained control and eventually won the battle, capturing 38 cannons in the process. The Maratha casualties numbered approximately 5000 whilst the British forces suffered a total of 360 casualties in all. The Mysore cavalry along with East India company forces pursued the defeated Marathas for two days and 'captured their baggage'.

Click on map above to view in more detail

The victories at Assaye and Argaum, followed by the storming of the hill fort at Gawilgarh, eventually led to a successful peace with Sindia on 30th December 1803, with the signing of the treaty of Surji-Anjangaon.

Wellesley rose to prominence as a general during the Peninsular campaign of the Napoleonic Wars, and was promoted to the rank of field ma