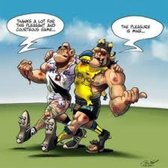 Planned submissions for this week are running late, so here's something to keep you all amused.

A rugby referee died and went to heaven. Stopped by St Peter at the gates he was told that only brave people who had performed heroic deeds and had the courage of their convictions could enter. If the ref could describe a situation in his life where he had shown these characteristics, he would be allowed in.

"Well," said the ref, "I was reffing a game between Northern Transvaal and Natal at Loftus Versveld. Northerns were 2 points ahead, 1 minute to go. The Natal wing made a break, passed inside to his lock. The lock was driven on by his forwards, passed out to the flanker who ducked blind and went over in the corner. However, the flanker dropped the ball before he could ground it, and as Natal were clearly the better side all game, I ruled that he had dropped the ball down, not forward, and awarded the try."

"OK, that was fairly brave of you, but I will have to check it in the book," says Peter, and disappears to look it up. When he comes back he says, "Sorry, there is no record of this. Can you help me to trace it? When did all this happen?"

The ref looked at his watch and replied "45 seconds ago."

Well," said the officer," I am simply surprised. Normally when I look under an Australian hat, I find an @rsehole!"

Q. You're trapped in a room with a tiger, a rattlesnake and an Australian rugby fan. You have a gun with two bullets. What do you do?

A. Shoot the Australian fan - twice.

The club president, coach, a prop and a wing are taking a charter flight to the National Finals when the engines cut out.

The pilot enters the passenger compartment and says, "We're going down. There's only four parachutes! Since I'm the pilot I'm taking one," and then jumps from the plane.

The coach says, "Without me the team won't have a chance, so I'm taking one," and he jumps out.

The winger says, "I'm the fastest and smartest man on the pitch and without me the team can't win a game, so I'm taking one," and he jumps out of the plane.

The club president looks at the prop and says, "You take the last parachute. The team needs you more than it needs me". The prop responds, "We both can take a parachute. The smartest man on the pitch just jumped out of the plane with my kit bag on his back."

Traveling in a train were a Wallaby, an All Black, a spectacular looking blonde and an older lady. After several minutes of the trip, the train happens to pass through a dark tunnel, and the unmistakable sound of a slap is heard. When they leave the tunnel, the Wallaby had a big red slap mark on his cheek.

(1) The blonde thought - "That horrible Wallaby wanted to touch me and by mistake, he must have put his hand on the lady, who in turn must have slapped his face."

(2) The older lady thought - "This dirty Wallaby laid his hands on the blonde and she smacked him."

(3) The Wallaby thought - "That bloody All Black put his hand on that blonde and by mistake she slapped me."

(4) The All Black thought - "I hope there's another tunnel soon so I can smack that stupid Wallaby again."