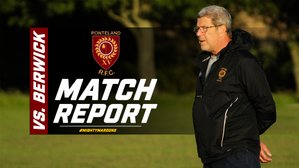 Ponteland RFC got off to the perfect start in their new season with a win that advances them into the semi-final of the Senior Plate Competition.

With immediate energy brought from both sides there was little to divide the sides until the sixth minute where Patrick Holliday was sent to the bin for a 10 minute spell for a high tackle.
Berwick utilised the extra man and through fast hands they found space out wide and went over the score in the 13th minute. A successful conversion attempt was shortly followed by a penalty conversion and by the 17th minute Berwick were sat with a 10 point lead.
The remainder of the half saw #TheMightyMaroons edge closer and closer to the Berwick try line but were unable to capitalise and execute the final plays.
HALF TIME
BERWICK RFC 10 – 0 PONTELAND RFC
The second half picked up exactly where it had left off with both sides showing no signs of slowing down the intensity.
But it was the debutant Thomas Reeman who demonstrated his fast feet and elusive skill to make a 20-metre dash before going under the sticks to score. Ryan Gerrard added the extra’s and #TheMightyMaroons were back in the game in the 56th minute.
Several players were forced off due to injury which caused a major reshuffle in the backline for #TheMightyMaroons and with that Berwick found themselves extending their lead through an unconverted try with less than eight minutes remaining.
Berwick were then reduced to 14-men when their number eight was caught giving two successive high tackles.
#TheMightyMaroons worked their way into a promising position and with that Connor Beswick picked the ball up and crashed five metre’s before stretching out to score. Followed by an unsuccessful conversion attempt, #TheMightyMaroons were trailing by just three points with only four minutes left on the clock.
After a few quick exchanges of possession between the two sides, #TheMightyMaroons ended up in receiving a scrum bang on Berwick’s 22-metre line.
A play co-ordinated by Tom Taylor saw Paddy Holliday race into space before making a sweet one-handed pass to Josh Beswick who blitzed the final 10 metres and went over to score in the far right corner in the 79th minute. After the celebrations cooled and the conversion attempt was missed it was understood that #TheMightyMaroons had one minute to catch the kick off and finish the game.
Adding to the drama, Berwick were able to retain possession from the kick off but were unsuccessful in attempting to create anything from it. Resulting in a win sends Ponteland RFC in to the semi-final where they will face the winner of Anlwick 2XV vs. Medicals on Saturday 2nd November.
FULL TIME
BERWICK 15 – 17 PONTELAND RFC
Ponteland RFC:
1. James Croney
2. Sean Bettison
3. Nav Singh Bal
4. Ben Stewart
5. Connor Beswick
6. Courtney West
7. Phil McAreavey
8. Sam Long
9. Tom Reeman
10. Ryan Gerrard
11. Will McFarland
12. Michael Searle
13. Elliott Blain
14. Andrew Metcalfe
15. Patrick Holliday
16. Harry Lane
17. Stuart Brown
18. Stuart Avis
19. Nathan Rebucha
20. Tom Taylor
21. Josh Beswick
Tries: T. Reeman (56 min), C. Beswick (76 min), J. Beswick (79 min)
Conversions: Gerrard
Man of the Match: Tom Reeman
Share via
FacebookTwitter
https://www.pitchero.com/clubs
Recent news