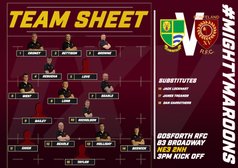 #MightyMaroons name side to travel to Gosforth

The #MightyMaroons see some fresh faces appear in this week’s line up which travels to Gosforth this Saturday, 3pm kick off.

James Croney returns to the front row after coming back from a concussion while Joe Nicholson gets his first start for the #MightyMaroons as he fills the number 10 shirt.

The backline see’s further change with the Josh Beswick and Tom Taylor making their first DN2 league appearances this season. They both make their first appearances since the last-minute win in the win versus Berwick earlier in the season.

The #MightyMaroons also see one fresh addition to the squad as James Treanor pulls on the shirt for the first time for the first team while Jonny Love makes his first appearance of the season as he steps up into the second row.