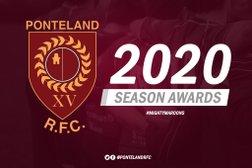 With the end of year celebrations continuously being delayed, we hope you celebrate at home while we highlight the successes from the previous season.

After what started as a fantastic season for the club with high numbers for pre-season and the launch of our new Women’s Team 'Ponteland Tigers' was all unfortunately cut short as lockdowns began. While the season will be remembered for many reasons, we take a look back at those who stood out in this obscure season and stamped their mark as an influential person throughout this time.

We start with the first team whose unfortunate relegation the previous year now saw them take on their return to the Durham & Northumberland Division Two with new Head Coach Paul Gerrard at the helm.

Going on an eight-win streak from the get-go, the side strung together some notable performances with away trips to Blyth (7-74) and Gosforth (0-91) bringing the biggest delight to fans. Winger Josh Beswick flew across the line three times in Gosforth showing significant improvement in his second year as a senior player. He later went on to score another seventeen tries throughout the season resulting in him picking up the Top Try Scorer Award.

The young winger was also voted Most Improved alongside young prop Harry Lane. Coming back from an injury he received in the previous year, Harry showed glimpses of real skill in the games he played and will look to build on these performances on the upcoming season.

Chasing for the top spot in the table for large parts of the season, back row Sam Long and full-back Paddy Holliday played key roles in the team's performances. Gaining seven MOTM awards between the two, it comes to no surprise the two were in line to receive end of season awards. Sam Long receives the Captain's Award while Paddy Holliday is voted Player of the Season.

With twenty wins in twenty-two fixtures the season was called off and the #MightyMaroons were awarded automatic promotion by the RFU.

This year’s second team saw Dan Grant take the captains armband for the first time with excellent enthusiasm. Organising and fielding a team for twenty-one second team games as well playing proved a challenge but one he massively stepped up to. Ensuring students had travel to training and games, his effort was not gone unnoticed as he receives the clubs prestigious Push over Pugh award. An award which is given to those who go above and beyond for the club.

The effort and success of both teams saw older players come forward and allow us to field a third string team for the first time in a while. The Ponteland Pythons perfectly demonstrated how ‘age is temporary, but class is permanent’ as they brought home the county cup – another trophy to add the club’s collection.

Further off field action saw Mike Robson continue his fantastic work with the junior section and in turn sees him receive the Geoff Batey award. An award named after a former member of the club recognising the outstanding efforts made in the organisation of the club. Mike has successfully run the mini and junior section of the club for years having organising training sessions for age groups, allocating pitches for Sunday training sessions and searching alternative venue options through challenging times. Alongside this he has also managed a colt’s side which has had twenty players available week in, week out.

The final award to present is the Dr Nicholson Trophy; this magnificent trophy was presented to the club by the family of Dr Nicholson, the founder member of Ponteland Rugby Club, in his memory. It is presented annually to the most successful team in the club. For the 2019/2020 season, the winner of the Dr Nicholson Trophy is the 1st XV after their triumphant season which saw them immediately bounce back into Durham and Northumberland Division One.

The club would like to thank all friends, family and fans of the club who have supported us throughout this difficult year. We wish those all to stay safe as we hope to see you for a magnificent return this September in the new season.