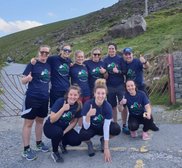 As a self-funded club, we rely on sponsorships and generous donations to help us through the football season.

To assist, our amazing ladies decided to help by completing an epic fundraiser, completing the Welsh Three Peak Challenge over a two-day period.

The Challenge itself consisted of a 2864m ascent which is split across 3 mountains, Pen-Y-Fan, Cadair Idris and finally Snowdon. The hikes over 2 days would push us and be the ultimate pre-season fitness and team bonding experience setting us up for the season ahead.

Following the adventure, we caught up with one of the organisers Emma Acott and asked her a few questions about the fundraiser.

1. What made you decide to do the challenge ?
Gubb put a message out saying that further funds were required to help the club as competing at such a high level in the game can be quite costly, so we really rely on local companies and their kind sponsorship. Someone suggested the National Three Peaks but we realised this wasn’t feasible with such limited time for people to book holiday, so decided to do the Welsh 3 peaks instead.

2. What are the highlights from the trip?
The highlights were definitely when we reached the top of each mountain, it was like we’d just ticked off another one, even though we had to go back down again.
Spirits were still high the Saturday night playing ‘heads up’ and laughing and joking with each other - it was a great team bonding experience. The feeling when we got to the bottom of Mount Snowdon and we had completed the challenge was indescribable- it was a simply immense feeling.

3. What were the hardest parts of the challenge ?
The hardest part I think was the second mountain. The weather really wasn’t on our side throughout the day and it got to the point when we questioned going any further.
We were all wanting to get to the summit of Cadair Idris and we tried to keep pressing, but when we met people near the top who said it wasn’t safe, we had to put our own safety first.
Going down that second mountain was tough, the paths had become streams and I think we were a little deflated because we hadn’t quite got there, despite the fact we did everything we possibly could.
We obviously then decided to take the hardest path up Snowdon, and the final ascent before the top was basically rock climbing. I know that was really tough for some people, and it just showed our teamwork to pull each other up!

4. Is there anything you’ve learnt about yourself or the team by completing the challenge ?
I’ve learnt that between two of us I can help to organise something and it actually turns out just how I wanted it to. I’ve also learnt that we are a really strong team and I am so lucky to be able to play for Poole Town with such a fantastic group of ladies!

5. What’s your expectation for the new season?
We had a tough season last year with a lot of changes in management and personnel but we learn from it and that’s now behind us. As a positive we had some terrific players progress through our youth teams and to see them play in the FA Women’s National League was amazing. We now move our focus onto the season ahead and aim to show that we are in this league for a reason and show everyone what Poole Town Ladies are all about

6. Do you have any more fundraisers planned?
Even though it was tough at times we’ve all really enjoyed the weekend, bringing some lasting memories and stories to tell, so we will most definitely look to do something like this again.
With a bit more time to plan hopefully we can double the number of us taking part and make it apart of our season ?

If you’re interested in sponsoring the ladies, it’s not too late, please show you’re support:
https://www.justgiving.com/crowdfunding/pooletownladies?utm_term=YXnDDyQxW

Alternatively, if you’re a local company and would like to sponsor the team in their footballing journey, we’d love to hear from you. Please contact us on sfclisaandy@aol.com