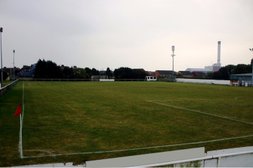 After 69 years at Victoria Rec, the club moves to Southwick FC ground for the 2018-19 season

After spending almost the club's entire history at Victoria Rec, it came with a mixture of sadness and excitement as the club moves just down the road to the impressive facilities at Old Barn Way.

Southwick FC are a club which are operating in the Sussex Combined Football League Division 1, and have their own history to rival our own, forming in 1882, and have a mixture of success along the way.

The season opener is on 1st September, as we host our first game in the Mid-Sussex Division 1 against local Brighton boys, Brighton & Sussex Medical School. Southwick are very pleased to establish a relationship which helps them bolster finances, and ensuring that such facilities get maximum use. With 2000 ground capacity, well positioned bar facilities and humongous changing rooms, it gives the players all they need to feel at home, it's just about doing it on the pitch now. Slade opened the pre-season at Old Barn Way the Thursday before last, earning a late 1-1 draw against Brighton Sunday league side, Impulse FC.

After a difficult couple of seasons, it has been important to re-assess this season, to make changes which are going to change the direction of the club for the better. This is the start of a number of exciting changes, keep your eyes peeled for more.