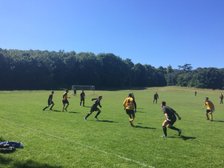 Slade the PRIDE of Stanmer

Slade find some form, as they turn a 3 goal defeat into a 3 goal victory

On a day where most of the county were enjoying the festivities dotted around the city, as the LGBT community is duly celebrated, tucked away in the corner of Stanmer Park, Slade were preparing for their second practice game of the pre-season campaign against Ashurst Wood. Ashurst Wood today were a mixed bag of first (Championship) and second team (Division 5) players, minus a recognised goalkeeper.

Whenever I have played at Stanmer Park, the conditions have always been absolutely baking, and today was no different. Factor 50 sun cream was out in force, with the squad huddled under the protective shade of a large tree. It was all change in this weeks squad, and a great deal of re-shuffling in the starting line up as a few late withdrawals forced manager Hornsby's hand. However Slade were very pleased welcome back Kieran Sills into the fray as he took the gloves for the first time this season. This week Slade boasted a more orthodox back four with captain Larkham resuming in his more familiar left back slot with McEnery switched over to the right, while Tom Bendall and Ben Graves made up the centre back partnership. Slade resumed with a 4-5-1 with anchor Darren Tai joined in midfield by Matt Hornsby and Rob Ingham. Slavomyr Voytyuk made his Portslade debut on the left wing with Andy Nicholls making his second start on the right. Liam Reyland making his first start of the season as a lone gunman up front. Ben (who's surname still eludes me) was joined by regular latecomers Nick Samuels and Genardo Campbell.

The opening exchanges were relatively even with Ashurst quite happy in possession, and Slade offering perhaps a little too much space in the defensive third, but it was nothing which our defensive cohort could not deal with. In fact it would be Slade that would open the scoring in very stylish manner. Tai on one his more advanced forages forward, found the intelligent run of Reyland in behind the Ashurst right back, and with one touch to control the pass, opens his body up and expertly slots the ball in the right hand corner of the goal, very Henry-esque. The game continued in the same manner with some of the new Slade faces looking to find their positional sense, and with Ashurst looking to be a bit heavy in the challenge, trying to perhaps rough up their opposition. It did not deter Slade's attacking intent though as they duly doubled their lead. A free-kick about 25 yards from goal looked in a not so threatening position, but Tai proceeded to aim his kick at the keepers right hand post, and as the ball bounced just in front, it squirmed under the make-shift Ashurst stopper and into the goal.

Midway through the half, largely due to the sweltering conditions, the referee very kindly agreed a brief water break. But this reprieve would only result in Ashurst pegging the score back a notch as the match resumed. A free-kick on the left hand side of the Slade penalty area was hooked into the box, and with all Slade players dozing in the sun, one grateful Ashurst player rose to head freely into the corner of the goal giving Sills no chance. A very brief, but costly lapse in concentration, and the score was pulled back to 2-1. Late on the half, some excellent forward play by Reyland pulling the Ashurst defence one way or the other, before eventually pulling wide, and sending a good ball across the box for debutant Voytyuk to glance home with his right foot into the far post corner. A satisfying end to the half, and Slade go in half time 3-1.

There were not many words at half time, just lots of water glugging and the passing round of a surplus of Jaffa cakes. At half time Slade looked to re-shuffle the team around switching to a 4-4-2, with Nicholls, Ingham and Voytyuk stepping out with Campbell, Ben and Samuels stepping in. Ben slipped into right full back, with Ollie moving on to the left of midfield, with Samuels taking up the right midfield slot. Campbell joined Reyland up front to further terrorise the Ashurst defence. Ashurst were enjoying the lion's share of possession, and Slade were happy to play deep, frustrate the visitors and use pace on the break. Reyland and Campbell were providing different problems for the Ashurst defence while McEnery and Samuels were stretching the opposition on the flanks. A dead leg for Samuels resulted in an early retirement and Nicholls returning to the fray, with Reyland being swapped out for Voytyuk late on. Ingham swapped in for Hornsby late in the half to provide the last goal of the game as some good work by Tai released Ingham into space, and with several players breaking forward, presenting tasty options, Ingham finds Campbell on the edge of the box to slot past a stranded keeper.

The game was up shortly afterwards, and Slade won by the same deficit which they lost to in the first practice game. A much improved team performance, built on the base of a solid defensive base. The midfield was much more compact, and suffocated the limited opposition from goal scoring opportunities.

Next week, Slade take on Wivelsfield FC at Hassocks on 3G as they look to further improve their form. Please let Matt know if you wish to be involved, especially if you haven't so far.