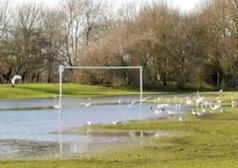 NO PRESENTS ON SHOW IN CUP DEFEAT

A day dominated by Manager Matt's 40th celebrations did not include a win that would have put us through in the Sussex Intermediate Cup.

This belated report will not go into great detail, but despite the scoreline this was another, in many ways, encouraging performance.

With a number of absentees due to injury, weddings etc, a changed line up produced an almost carbon copy of the performance a week earlier.

After resisting early pressure we found ourselves taking the lead after 15 minutes. A precisely taken corner by JB landed on the head of Sean who made no mistake from 6 yards with a firm header. This momentarily stunned the visitors but they were soon back on even terms just 2 minutes later. As the weather closed in we found ourselves under increasing pressure which was to see us go behind as we headed into the break with a 2-1 deficit. We were still well in the game and had the skipper been more accurate with his finish after a rampaging foray deep into their penaly box, parity would have been regained.

In the second half, we were largely penned in our own half but defending stoutly as the weather turned from bad to awful. A stroke of luck saw a shot rebound from our upright only for that fortune to evaporate as the rebound fell kindly for the opposition and left us 3-1 down and a hill to climb.

Heads could of dropped, but they didn't and we continued to probe for chances to get back in the tie although clear cut opportunites were proving elusive.

The scoreline was given a very harsh look due to a late thunderous drive from almost as far out as JB's the previous week (but not quite and not as good) followed by a last minute penalty from a tired challenge.

This might sound like a comfortable win for Jarvis Brook, who have been in fine goalscoring form this seaon, but they will know they had been in a game and we kept well in contention for long periods.

No reason to be disheartened, although the opportunity drown some sorrows in the evening was welcome.