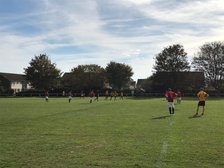 Samuels at the double!

Saturday 13th October saw the yellow and black army continue their recent wanderings and take a short trip westwards to Lancing, to Grafton Drive, home of Lancing Utd FC for the first game of the Mowatt Cup (yes I looked that up).

With the team warmed up under the watchful eye of gaffer Jack Larkham, just a worn out cap away from cutting the Pulis like figure he was destined to be (come on you Potters).

With the lads gathered in the dressing room, Larkham set his stall out, plain and simple, “They [Lancing] think this game is won and we are a bag of shit”, very blunt but very true. The opposition had a pedestrian warm up to put it lightly, their only heavy lifting came as they delivered the goals onto the pitch.

“You have a choice to either prove them right, or stand up and be counted”. “Break up play, slow the ball down and generally be bastards to play against” barked Larkham, his words galvanising a feeling that Slade’s recent run stops here. But it would take organisation and above all heart to put one over a side who have started their campaign in the league above well, cue Portslade’s first complete performance of the season…

The first exchanges were a perfect example of why warm-ups are so vital to a performance. Portslade were out of the traps with intent, intercepting a number of loose Lancing passes and putting the home side on their heels. After 5 mins it was clear we were able to press much higher up the pitch as their back 4 found it difficult to execute their game plan which was to play out from the back. Bison, Nick and captain of the field Joe all getting early touches and looking for balls in behind. An early goal looked on the cards but Slade were narrowly missing out on the final ball.

The second reason why warm ups are key was after 12 mins Graves, having been stuck in traffic and arrived late, in pushing up to pressure Lancing’s holding midfielder, proceeded to go down like a sack of shit. A knee injury ended the afternoon for him and Korn-dog was the early substitute.

But the half continued in the same fashion, perhaps with Slade losing some of the high intensity pressing they had in the first 10 mins meant that both sides were able to string passes and the game became more open.

This continued until the half hour mark when Lancing won a corner from a ball down the right flank. The ball was put in deep towards the far post, where Larkham was expecting one of his big men on the 6 yard line to hoist it clear, but instead, the two players at the back post had been distracted by an early runner and allowed Lancing’s CB to put a powerful header towards goal, Adrian could only get a finger tip to the ball and it rippled the roof of the net, 0-1 Slade. Take notes kids, zonal marking, don't watch the player, watch the ball and get your sodding head on it, lesson over...let's move on.

Not to be sunk by a set piece goal and keen to restore the crackerjack tempo of the opening exchanges, the half swung back in Slades favour, Joe had taken the deeper role from Bison, now able to take the ball under less pressure and spray passes to the willing midfield runners of Pat and Kornilios, finding joy against a back 4 that looked like they were treading treacle at the best of times.

It was this handy treacle which saw Slade find a quick reply. With another dispossession in the Lancing midfield the ball was played quickly to Samuels, he took the ball at pace, switching the ball from left to right foot he was able to cut inside 2 lancing players and into the box, shrugging off the last man before catching a sweet shot that dipped just under the crossbar... “I thought he'd missed!!” cried Mould from the sideline, oh ye of little faith, Nick showing dogged intent to get into the box and left Slade players and fans thinking ‘ if only he turned up on time every week and started!?’

The last 10 minutes of the half saw more chances come the way of The Yellows, two clumsy challenges and a handball on the fringes of their own area allowed Patryk to try for another free kick cracker, alas whilst both efforts were on target, he wasn't able to wrong foot the keeper, but confident strikes nonetheless, Half Time.

I didn't go in to hear the half time team talk as it would've taken 15 mins to limp inside, I assume the mood was buoyant, determined and colourful, a few choice words and after blasting his troops for the set piece mistake (I assume) Larkham sent his troops back out in search of a goal that would see Portslade take command of the cup tie.

Jack was to get his wish. Slade again picking the pockets of the Lancing midfield who at this point had barely put a ball behind Jordan or Dan that his go-go-gadget legs couldn't block out and with the raking passes of Joe and Bison starting to find midfield runners in space, Slade soon found found their breakthrough.

Charlie had made way with a hamstring tweak for Kuba to help lead the line. Before the hour a neat exchange in the left channel saw Patryck (I think) put a ball over the top of the sluggish CBs, Nick took the ball, again at pace and made a run straight at the Lancing keeper, who had a decision to make, whilst he made the right choice to hold his advance out to the edge of his area and stayed on his feet wisely, Nick held off a defender long enough to place a shot over the keeper as he committed himself and again into the roof of the net, top tits, splendid strike and Nick bags a brace on his daughter’s birthday, a treat indeed.

Portslade kept trying to turn the screw, by this point Lancing’s hefty goal scoring defender was moved into midfield and an even heftier CB replaced him, you would think Nick was licking his lips at the prospect, but with this being his first start for a while, Nick looked almost spent. In fairness he had chased everything and lead the high press from the front, disrupting Lancings tempo and with the willing running from Korn-dog and Patryk had forced their defenders into slicing the ball out of play regularly.

This pressing had allowed much more space for Joe and Bison, who at times looked to be playing in their slippers with the ease they could send a range of passes around the park, but not to take away from the hard yards they put in to chase down and tackle everything that moved and really kept our back 4 shielded with expert aplomb (that's right I used a fancy word, it means self assurance in demanding situations...boom).

It was top ‘double team’ slide tackles from Bison and Munroe that brought about a second half flashpoint as the Lancing holding midfielder came charging in and flailed a leg at Bison in an attempt to dislodge the ball, you can't dislodge a Bison and the famed Shelley chuckle met the player and probably a few utterings of “you're a prick mate”, classic Bison.

The game turned into a genuine nail biter for the crowd, with the referee Brent arriving late, nobody was quite sure how long was left, Mouldy on the sides reassuring a nervous Harry that there was only 10 mins to hold out, but Mark bellowing “20 minutes boys!!” I didn't know who to believe, after a check with the ref, Slade had 12 mins to hold out for their first victory, come on Yellows!

A knackered Nick had to save a hat trick for next week as he made way for Paolo, who slotted in as an extra defender and Sol coming in as a wing back on the right meant that Slade could enjoy a lot of ball in this channel, Kornilios giving chase to all lost causes and forcing yet more mistakes from the Lancing full backs who would've been better off staying at home today.

It wouldn't however be a Slade victory without some last minute scares, a series of Lancing corners called for some intense rearguard action, but the cumulative sums of Jordan's head, Dan’s freakishly long legs, Mark’s blocks and Joe’s last ditch tackles kept Lancing at bay. But cue Adrian to make a crucial stop from a Lancing free kick in the dying minutes, Portslade's new No1 looking more brave each game and now building a good relationship with his back 4, who were on hand to throw themselves at the ensuing goalmouth scramble.

With the ball back up the other end and the cool head and dancing feet of Bison in the opposition corner, was able to wind the clock down until the referee eventually blew up for full time, a well fought out victory, two cracking goals but more importantly a whole team performance which was more than the sum of its parts.

The players came into the dressing room covered in bumps and bruises, but donning smiles from ear to ear, that's what you get when a whole team are up for a game, get behind each other and do everything for 90mins.

Big shout outs go to the whole squad and travelling support today, everyone gave great account of themselves and after writing all this I really can't be arsed to name you all, but you all know how important picking up a first victory is to kick start a season, well done to all of you, Jack himself said it would be wrong for him to pick a MoM after the game, 2 great goals and a great return to the starting lineup for Nick has to come close, but some fantastic support roles from the likes of Joe, Bison and Dan did stand out from the sidelines. This should not take away from the fact that any number of 4-5 players could have been MoM today.

The squad now look ahead to coming home, finally the travelling circus that is Portslade return to Southwick for our first home game in what seems like forever, and with social media buzzing with rumour of a new 2019 home kit and training range, who wouldn't be excited. Leaks online are rife and rumour has it Liam will be giving free haircuts in the home stand to friends and family (that's what I heard anyway).
So if you want a Harry Smith haircut and watch Portslade's return to Mid Sussex league action at home, train hard and get yourselves down to Southwick on Saturday.