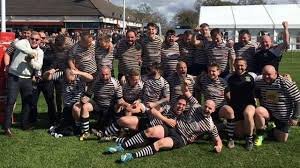 Despite the Covid19 shortened season, Port Sunlight RFC have been confirmed as League Champions for the 2019-20 Season.

Despite the Covid19 shortened season, Port Sunlight RFC, 9 points clear at the top of South Lancashire/ Cheshire 2, have been confirmed as League Champions for the 2019-20 Season.

Having successfully amassed over 80 points, beating all opponents and in double figures for bonus points, Port Sunlight were deservedly awarded the league title by an RFU adjudication panel. Despite regular cup successes, his represents only the second time since the formation of the leagues that Port Sunlight have been crowned league winners. The inevitable delay in celebrations will only serve to make the victory drinks even sweeter. Congratulations Sunlight