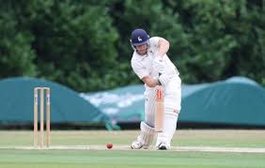 BAR FALL TO DEFEAT AS GOOD POSITION WAS WASTED

Bar slipped to their third defeat in four matches as they came up short when well placed at table toppers Welwyn Garden City.

Skipper Steve Gale won the toss and opted to bowl first on a flat pitch and with some small boundaries and a fast outfield, it was clearly a damage limitation exercise against the hosts.

Bar got their breakthrough in the 5th over as James Scott bowled Alex Chalker for 21, who'd received a life in the previous over and he got his second wicket having Louis Champion caught in the deep for 28, which left the hosts 67 for 2. That was as good as it got as the hosts batted nicely and Bar didn't have the same tenacity as they had against Totteridge Millhillians and for large parts the innings tended to drift a little.

Welwyn Garden City took the attack to Bar and the returning overseas cricketer, Matthew Grant and Owais Shah out on 86 in 102 balls as Bar looked short on ideas and a large total looked ominous.However Thilan Walallawita got the prized wicket of Owais Shah for 50 but that brought in James Southgate and he continued his fine form against Bar and made batting look easy.

Matthew Grant (59) miscued and gave Luke Chapman a skied return catch for 59 but he and Southgate had put on 60 in 56 balls and with 8 overs remaining, Welwyn Garden City were sat 213 for 4 and looked odds-on to reach 300. To their credit Bar kept chipping away. Jamie Hewitt was stumped for 16 and skipper Andy Nolan chipped to deep square leg for just 3 and a swashbuckling partnership between James Southgate (65*) and Connor Emerton (18*) saw the hosts post 284 for 6 from 50 overs.

So a large total to chase and it did't begin well as Pat Scott edged behind for just 9 when the bard as showing 18 but Steve Gale, struggling with cramp, re-found his form as he batted serenely and Harrison Palmer continued his good form from last week. The pair put on 50 in 53 balls but Harrison Palmer edged to keeper Mottershead for 25 to leave Bar 68 for 2.

This brought Rishi Patel to the crease and he and skipper Steve Gale batted Bar into a wonderful position with some fine batting as the Essex cricketer struck 10 boundaries in double quick time. The hosts looked in deep trouble. Both batters completed their 50's, their first for the season as Bar were 160 for 2 needing 125 off 132 balls and both well set.

However Bar gave wicket after wicket away as panic set in, the hosts gained more belief and it was a slow execution as the result was starting to dawn.

Rishi Patel went for 50 as he picked out deep midwicket. James Scott was unlucky as it appeared his bat hit the ground as opposed to the ball hitting the bat and was adjudged caught behind. 160 for 2 was now 163 for 4. Steve Gale went in the over before the final drinks break for a fine 76 as he miscued to mid-on.

It was then a slow death as the middle order succumbed to the slow left arm bowling of veteran Simon Bridgewater, who snared 4 for 23 as Bar kept whacking it in the air and the Welwyn fielders kept catching it. Bar were dismissed for 219, losing by 65 runs but at 160 for 2 to lose 8 for 59 in 93 balls was a poor way to miss out.

Next week they host Bishop's Stortford in the final 50/50 game of the first half of the season and whilst they have played the top 3 in successive weeks from 2018 and have more points than the respective games of 2018 but they will need to find their form and belief sooner rather than laster otherwise it could be a long summer.