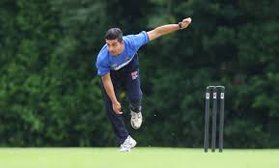 Potters Bar slipped into the top 4 with a convincing win over current bottom of the table side West Herts as they had to make all the running as well as defeat the weather.

Skipper Steve Gale called incorrectly and was asked to bat first and both he and James Scott toughed out the first hour, when batting was difficult against the prolific Will Jones. However tough it out they did and put on 75 before Steve Gale was caught for 36. James Scott batted nicely and completed his second successive 50 but as lunch neared he perished for 56 to a return catch from overseas pro Jaahid Ali.

Bar went into luck sat 108 for 2 and after the break it was Bar's Rishi Patel and Rehan Hassan who took centre stage as they put on 87 in good time as both batters made 50's and it was Rishi's third straight half century. The Essex staff member perished on 53 as he went to a run out but Rehan Hassan powered on and dominated a partnership with Ashane Wijesuriya as Bar got past 250.

The pair had put on 60 as Ashane Wijesuriya was run out for 9 but Bar ended 258 for 4 from 60 overs, Rehan Hassan ending 2 shy of a maiden PBCC century of which his 112 balls stay probably deserved.

So 259 to win but Bar had to bowl well but the weather was circling.

They went off after just 1 over but on the resumption, Jigar Mehta bowled a fine spell as he removed Alistair Lewis and next ball got the prized wicket of Jaahid Ali who was adjudged leg before. Teddy Duke kept up the pressure and he got the wicket of Craig Sanders and when Jigar Mehta bowled Joe Warren and Matt Smith, the hosts were effectively done for at 37 for 5.

West Herts fought back however and a partnership of 55 between Will Jones and Richard Mason kept Bar waiting and with the dark clouds nearing they still needed wickets quickly. Pace off the ball worked and Luke Chapman enticed Will Jones (34) to leave his ground and Ashane Wijesuriya whipped off the bails and from then on it was a case of when rather than if for the visitors.

Paul McGee got the wicket of Richard Mason for 37 and then it was a case of hit a couple of nice shots and a wicket would fall which saw Jigar Mehta complete his first five wicket haul for the club (5 for 25) Luke Chapman (2 for 20) and a wicket apiece for Teddy Duke, Thilan Walallawita and Paul McGee completed a 109 run win.

Successive wins for Bar and next week sees them host Harpenden.