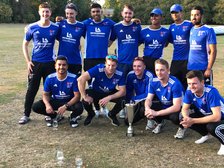 Bar ended their time matches for 2019 in the cruelest of finishes, with just 6 required for a win to keep on the heels of the top two and 27 minutes left for play, saw consistent heavy rain fall and leave Bar stranded.

Bar, who were without Teddy Duke and Thilan Walallawita through injury and Pat Scott on holiday found themselves bowling first on a tired old pitch but were soon celebrating as Eddie Ballard was leg before for a duck and soon after Adam Bassingthwaighte had snicked behind for just 5. When the home skipper Dominic Chatfield, fresh from a big County hundred in the week was bowled for just 9 and at 37 for 3 Bar were in the pound seats.

However some sensible batting from Reece Hussain, fresh from his unbeaten hundred last weekend and Tom Burslem got the hosts back into it. Reece Hussain completed his 50 and in doing so he and Burslem had put on 50 as lunch was nearing. As the excellent paella was approaching, Hussain (63) was adjudged run out after some smart work from Rishi Patel at square leg.

After the break the hosts lost Tom Burselm (31) Joe Burslem 1 and Joe Hawkins 0 as the hosts went from 110 for 3 to 129 for 7 as Bar looked for a swift finish. However without Thilan Walllawita and Teddy Duke, options were a tad short and Sam Davis showed his batting skills arguably for the first time this season and eased to 50 and a late flurry of wickets saw Stortford dismissed for 187 in the 60th over.

For Bar, Luke Chapman took 4 for 31 and Jigar Mehta 4 for 45 and in doing so went through the 50-wickets for PBCC in League Cricket.

So 188 to win and as ever at Stortford Bar got off to a shocker. Rishi Patel was leg before to Tim Smith second ball, Rehan Hassan played on for 10 and Steve Gale edged to the keeper for 2 to leave Bar 25 for 3. However Charlie Scott looked in a good place and was batting nicely and he and his brother James bedded in and got Bar back on a level footing.

As tea neared Bar lost James Scott who was bowled for 15 and at 56 for 4 the target looked a long way away.

Charlie Scott completed his second fifty of the season in 73 balls as he and Harrison Palmer ticked along nicely. They put on 72 before Charlie Scott was bowled behind his legs for a fine 76. Still Harrison Palmer nudged and hurdled along and played as he did at Stortford last year when his unbeaten 64 won the Bar the game.

He and Ashane Wijesuriya batted sensibly and had the game effectively won as the target came down steadily. Harrison Palmer completed his second fifty of a truncated campaign in 116 balls and the pair and had completed a 50-run partnership in 69 balls. However with 6 to win and a minimum of 27 minutes left for play, it rained and then rained some more and then some more on top and Bar were cruelly robbed of a win to keep on the trial of the top two.

The argument of could Bar have been given the rest of the over to garner the 6 runs to deservedly win the game raged. The answer maybe they could - if the boot was on the other foot would the same result happen - probably would have.

Bar have in the past been the recipient of a rain curtailed game in not quite these circumstances in the past so no cribs here but man alive its a cruel way to have a win so close taken away, but thats cricket.