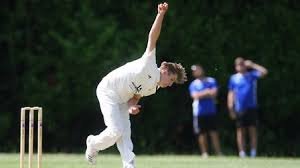 OUTSTANDING FROM TED AS BAR GRIND OUT 4TH WIN

The re-introduction of the red ball saw a reinvigorated Teddy Duke as he and Bar gained their fourth win in six to be in the top two after a third of the league season.

Teddy produced his best bowling figures with an outstanding spell of bowling which immediately put the hosts on the back foot. In his first over he snicked off Hamza Qayyum, who fell to a wonderful catch at second slip by skipper Luke Chapman. Four balls later the wicket of Neil Bamford, who coming off the back of a double hundred found Luke Chapman again at slip.

13 for 2 and Mymms in trouble but Nesan Jeyaratnam and Chanaka Ruwansiri went on the attack as the game still had the feel of a limited overs game to it, rather than the slightly more sedate timed cricket. 9 boundaries in the first 9 overs saw the rate an impressive one, but as the hosts were starting to get a foothold in the game, Teddy Duke struck a third time. This time he snicked off overseas pro Ruwansiri off for 23 and 51 for 3 was showing on the scoreboard.

Lee Tyrrell entered the fray and got a customary wicket with just his third ball, bowling Andy Lewis for 7 and in the next over Josh Matthews got his first wicket in PB colours as Nesan Jeyaratnam chopped on for 28, leaving Mymms 6 for 75. The Aussie was to strike again as he found the edge of Imran Qayyum's bat and James Seward made no mistake. Skipper Richard Soulsby saw it through to the break at 100 for 6.

After the lunch break, the game kind of drifted as Bar got through alot of cheap overs (21 overs in 54 minutes) as Anmol Maheshram took the wickets of Jhala and Sajjad and skipper Luke Chapman had Cohen caught behind, handing James Seward his fourth catch of the innings and his fourteenth of the league season so far.

Richard Soulsby completed a fine and dogged 50 in 89 balls but it was the returning Teddy Duke who bowled Bryceland and Mymms were dismissed for 161 with 8.2 overs remaining of their allocation. Teddy Duke ended with PB best figures of 4-34 from 8.4 overs.

So 162 to win in 63 overs and Bar started off confidently as Josh Matthews took advantage of a wild and wooly opening couple of overs from Asad Sajjad, helping himself to three boundaries and Bar were off and running.

Both Josh Matthews and James Seward carefully navigated the new ball and just looked to accumulate against some tight and nagging bowling, coupled with some excellent and keen ground fielding made scoring hard work. As the 50-partnership neared, the introduction of slow left armer Simeon Cohen accounted for Josh Matthews who held out to mid-off for 31 and at 48 for 1, the hosts hopes were raised a tad.

Still the pattern continued as Mymms went all-spin and James Seward could count himself more than a little unlucky as he slapped Ruwansiri out to deep square, where Neil Bamford jumped and caught him one-handed. He had gone for 24 and at 67 for 2 it kept Bar honest. Steve Gale and Reece Hussain saw it through to the tea break and Bar were 80 for 2, needing 82 from a minimum 35 overs.

After the break skipper Nesan Jeyaratnam continually looked for a breakthrough by chopping and changing his bowlers, but Steve Gale and Reece Hussain slowly ground it out and completed their 50 partnership in 98 balls as the target was slowly coming down.

A solid all-round performance from Bar, who next week sees them take on last seasons T20 and League Champions Hertford, who currently sit bottom of the table