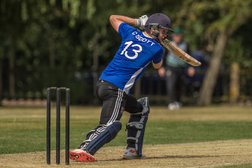 Bar drop a place to second after a frustrating draw with Hoddesdon where with a bit more belief the home side possibly could have won the game.

Bar were inserted on a good surface and managed to see off the new ball with Josh Matthews and James Seward carefully negotiating some tight seam bowling and keen ground fielding. The home side were restricting the Bar openers as it took them 110 balls to get to 50 but with wickets in the hutch, the scoring rate wasn't overly worrying for the visitors.

Bar lost Josh Matthews soon after as he was undone by a ball that spun sharply and hit the top of his middle stump. In strode Rishi Patel, not involved in the Leicestershire game with tourists India and he immediately looked in fine touch, finding the boundary on a couple of occasions. However Bar lost James Seward for 35 and an over later Reece Hussain was strangled down the legside for a duck and Bar were 76 for 3.

This brought in Charlie Scott and he and Rishi Patel looked in fine form and saw it through to lunch with Bar sat 3 for 106 from 34 overs. After the break the Bar batters pressed the turbo button and upped the rate. The pair had put on 50 in 57 balls and Rishi brought up his 50 in 47 balls as the 150 was on the horizon.

Hoddesdon kept with the spinners and Bar were looking at a large total as both Bar batters looked in imperious form. However as the overs ticked down Bar's shots became more aerial. Rishi Patel held out to deep square leg for 73 and Bar's batters came in, played a few shots and lost their wickets. James Scott was bowled for 14 and sadly Charlie Scott ran past one for a fine 79, his highest score for the 1st team as his 2022 form has been chalk and cheese from those of years gone by.

So 265 to win in a minimum of 55 overs and the hosts lost James Curtis for just 4 as he was bowled by Jigar Mehta. Hoddy skipper Rob Walters was joined by Jayden Broodryk and they batted nicely and looked in little danger as they found the ropes and scored at a steady rate and as tea was called 20 minutes early, the scoreboard showed Hoddesdon 63 for 1, wanting 201 from probably 41 overs - game on.

Just 5 balls after the break skipper Walters tried to hit Luke Chapman over mid on and the wind held it up enough for Teddy Duke to back pedal and hold a good catch. 65 for 2 saw Todd Sturdy come to the wicket and like with the second wicket, the hosts nudged and just batted sensibly. As the 100 neared, Bar got the big wicket of Broodryk as he slapped a full toss to mid off where Thilan Walallawita held with a degree of comfort. 97 for 3 and Bar had a toe in the door, but Sturdy and Steward made batting look relatively easy as they upped the rate and Bar looked short on ideas.

The pair hit 7 boundaries in 5 overs and they were shaking hands on a 50 partnership in 72 balls. With that milestone the target was now 111 off of around 20 overs with 7 wickets in hand and it looked for all money not just a close finish but odds on a home win. The last hour was called at 5-36pm - the target was 97 off a minimum of 17 overs and when the first over of that went for 7 it was now under a run a ball and with two batsman well set.

The changing of bowlers wasn't really doing it for Bar but it took an outstanding catch by Rishi Patel at slip to see the end of Will Steward who made a fine 40. 179 for 4 and Rob Jones came in and struck three nice boundaries saw the total to 199 for 4 in the 51st over. Todd Sturdy went leg before for 51 and with that the drawbridge was raised and the hopes of a win for the hosts were gone.

Rob Jones went two balls later to a pearler from Thilan Walallawita but there was to be not one run added in 11 overs - 64 balls to be exact and although Bar got the wickets of Burroughs and Cuffaro for 30-plus ball ducks a winning draw had to it for Bar. With the ball, Thilan Walallawita took 3 for 32 and Luke Chapman 3 for 54 and with his first wicket of the day, achieved 150 PBCC league wickets, where only 2 others have taken more wickets since the ECB League cricket inception.

A few conclusions could be drawn from this tame end. Bar probably didn't do enough with the ball to get the win, Hoddesdon could have shown a bit more ambition in their chase and not scoring a run for 66 balls and scoring just 24 runs in the last 19 overs highlights that point, however all teams at one time or another have to do this and have done it and the opposition just have to suck it up and move on.

16 points for Bar sees them drop to second where next weekend they entertain current leaders Radlett where hopefully the sun will shine in what will be a wonderful occasion.