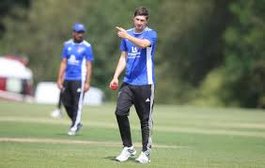 ANOTHER WIN SEES LEAD AT THE TOP GROW

A pretty much carbon copy win over Harpenden as last weeks' sees Bar stretch their lead at the top to 27 points at a sun drenched Walk at the weekend.

Skipper Luke Chapman won the toss and had no hesitation in batting first on another good Bar wicket and Josh Matthews struck 4 nice boundaries in his first 14 balls to get the innings off to a positive start. However he lost James Seward soon after, as he pulled one down to long leg where Chad Barrett held easily.

28 for 1 and the Australian was joined by Reece Hussain, fresh from his highest score in a Bar shirt and the pair batted nicely. The visitors worked hard in the scorching sun and whilst not really carrying a threat with the ball, they never let Bar get away from them until a little period before the break. As Josh Matthews brought up his maiden 50 for the club, Bar struck six boundaries in 14 deliveries prior to lunch which saw them go into lunch sat 126 for 1 from 29 overs.

Left arm speedster, Alex Gosling returned to the attack after the break and got Josh Matthews to slap a full toss to point, where Danyaal Khalid took a fine diving catch and the Aussie was out for 74. Worse was to follow as Rishi Patel picked out mid-off to hand Gosling his and Harpenden's third wicket of the day and at 3 for 138 Bar were pegged back by the reinvigorated visitors.

Reece Hussain was batting nicely and completed his fourth 50-plus score in five innings in 82 balls and in the process completed 1,000 league runs in a PB shirt as it seemed that Bar were batting time until the last few overs to throw the kitchen sink at it.

Arthur Garrett entered the attack and got Hussain stumped for 77 and then caught and bowled Steve Gale for just 3 and at 206 for 5 with 10 overs remaining, whilst Bar's innings was not exactly falling around its ears, a big score looked off the cards. However the Scott brothers had other thoughts and started to up the tempo. The pair put on 48 in 45 balls as the score was past 250 but James Scott picked out long on to give Sivarajah a deserved wicket .

However Charlie Scott in the best form of his PB career struck 34 runs off his final 12 balls to end unbeaten on 75 from 67 balls and saw Bar up to 293 for 6 from their allocation. Harpenden's slightly tardy over rate meant bowling extra overs would be a tough task.

Bar were to get off to a great start as they picked up the prized wicket of James Latham, fresh from 150-odd the previous week as he snicked Teddy Duke to James Seward for just 4. Scott Galloway cover drove Jigar Mehta with regularity to the boundary as the Bar bowler struggled for control with the new ball as the visitors were scoring at 5-an-over in the early exchanges.

However Danyaal Khalid pulled straight to Jigar Mehta at long leg and was gleefully taken for 13 and when Jigar Mehta found the edge of Scott Galloway's bat, edging through to James Seward, Harpenden were 3 down for 53. This brought in Harry Seagrave who like his predecessors played positively and struck 3 nice boundaries and a six but Luke Chapman went round the wicket and first ball of doing so trapped him leg before.

It would be unfair to say that Chad Barrett stood between Bar and a victory as the tea break arrived as Harpenden bat deep but that was really the long and short of the matter.

He looked in no trouble against the Bar attack as he hit the ball cleanly and positively and pretty much scored wherever and whenever he wanted but he kept losing partners when they began to look in at the wicket. Bill Meacock edged to slip where Josh Matthews held on. A good partnership between Chad Barrett and Jake Pankhurst saw the visitors get past the 150 mark. It saw Chad Barrett pass 50 from 58 balls but 8 balls later Pankhurst went caught at slip off of James Scott for 20 and their stand of 44 in 75 balls was over.

Barrett still ploughed on but in the last over before the last hour was called, the returning Jigar Mehta managed to entice a false shot where it was spooned skywards and Rishi Patel took a well judged running o ver the shoulder catch at midwicket. Barrett was gone for 63 off 67 balls and now it was whether Bar were good enough to snaffle the last three wickets in the time remaining.

Sivarajah went as he pulled one straight to deep square leg for 13 and then a determined partnership of 32 in 57 balls between skipper Nick Lamb and Arthur Garrett was ended as Anmol Maheshram got one to bounce and straighten and Garrett edged to keeper Seward for his third and 21st catch of the season. This meant Bar had effectively 25 minutes at the last pair but in the 20th over of the hour and with 10 minutes left , Alex Gosling drove a return catch to Luke Chapman who fell down and grabbed it.

Skipper Luke Chapman took 4 for 75, Teddy Duke 2 for 34, Jigar Mehta 2 for 62 and there was a wicket a peice for Anmol Maheshram and James Scott. This was a fine win against a good side who wont be far off the top 4 come the end of the season and I for one wouldn't be surprised if the two playoff for a place in the grand final on September 10.

Next week sees Bar travel to Bishop's Stortford where they will be looking avenge one of their two losses this season.